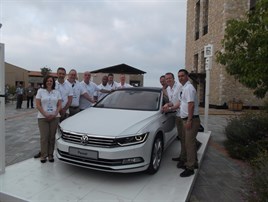 Martin Ward, manufacturer relationships manager at CAP, goes behind the scenes at Volkswagen's fleet launch of the Passat.

Volkswagen announced that the 8th generation Passat is the most important car they have launched, but I’m sure I heard that said at the last Passat launch, and the Golf as well. But it is important in the fleet arena as around 80% are sold to fleet buyers, so it is an important car for VW.

It was a 4hour flight from Birmingham to Kalamata in South West Greece, on the coast and beautiful surroundings, a great place to launch a new car, if not a little far from home and a long ride there. But Volkswagen have taken over this golf resort to show the new Golf GTE and Passat saloon and estate to over 20,000 people from around Europe, a massive event and logistical nightmare.

Those who will visit Greece will be fleet customers, dealers and VW’s own staff, who will all stay for one night, have a presentation and drive both cars on handling courses and the very narrow local roads. Volkswagen UK took 80 guests and 20 Fleet staff to join 500 other European fleet people from Europe.

In 2007 sales of Premium cars in this sector accounted for around 38%, but today, in Europe this has increased to 53%, a huge jump, and so VW want a piece of this action.

Orders from the top in Wolfsburg said that the new Passat had to be premium, Look premium, premium touch and feel and a premium looking car. To all intents and purposes the designers, engineers and quality control have just about achieved this.

But as good as the badge is, and as high as the quality is, there will still be many out there that will want a German, or British Premium car sat on their drives, or in the company car park.

The 8th generation Passat is about the same length as the 7th, but the wheel-base has been extended by 79mm, with most of the addition space being given to rear leg room which is now 4cm more, which doesn’t sound much, but when you get in the rear, it is noticeably larger, and a more pleasant place to sit for a few hours.

The new Passat is available to order now, and will be in showrooms next January. Five trim levels will be offered: S, SE, SE Business, GT and R-Line, and will be a diesel-only range. The Plug-In Hybrid GTE with a 1.4-litre petrol engine will go on-sale later in 2015. The best selling car is likely to be the SE and SE Business Edition fitted with the 2.0-TDI 150ps engine. The estate will have a £1,530 premium over the saloon.

Michael O’Shea, head of fleet said the addition of the SE Business Edition would have a huge appeal to user-choosers because of the standard specification including satellite navigation.

Fleet customers drove the 150ps saloon and 240ps 4MOTION estate in Greece and there was some fairly positive feedback, but there were no 1.6-TDI versions to drive, which was a pity, as this car is probably better to drive than it sounds on paper, and with the trend of smaller engines, and the Passats reduction in weight by nearly 85kg in some models it should prove a popular choice, but maybe there were none there for a reason?.

The 240ps car had more than enough power, whereas the 150ps did seem a little underpowered. It handled really well, went round the corners like it was on rails and rode over all the Greek potholes with ease. But what was really noticeable in all the road conditions was just how quiet it was in the cabin.

I think the fleet customers, whether from leasing companies, daily rental, end-users or public sector enjoyed their short stay in the sun, and thought in general the all-new Volkswagen Passat was better than they thought it was going to be. The Passat though is still in the middle of its direct competitors such as the Ford Mondeo, Vauxhall Insignia and Mazda6, and the premium end such as BMW 3-Series, Audi A4, Mercedes Benz C-Class, and of course the forthcoming Jaguar XE, but it will no doubt pinch a bit of a business from all these manufacturers.

Raj Makwana, fleet manager from APCOA Parking, said: "the new Passat will go head-to-head with BMW Audi and Mercedes Benz along with the more tradition competitors such as the Insignia, Mondeo and Mazda6, and will be more appealing to company car drivers.

Gary Curran, strategic supply manager at Venson Automotive Solutions said: "I was really impressed with the quality, the new Passat is real step up from the current model, and driver swill consider it where they haven’t before."

Dianne Brookes from Northumbria Healthcare NHS Foundation Trust, lease car team manager said: "its handling and dynamics was definitely over and above its competitors, its quality also outshone its direct competitors."