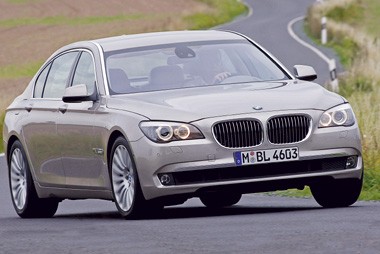 Quite simply, the new BMW 7 Series is a staggering piece of kit. It looks elegant yet powerful, drives beautifully and has some whizz-bang technology that is at times mind-boggling.

But after a load of spivs, foaming at the mouth with greed, decided to gamble the global economy on new Sunseekers and indoor swimming pools for their country retreats, will there be anybody to buy them?

For those executives who do escape the monetary meltdown with their cash intact, they should certainly take a look at the
7 Series, because it improves on all the areas the last one was deficient, and finally should match the Mercedes-Benz S-Class for sheer corporate authority.

The two most contentious elements of the old car, the styling and the iDrive, have been hugely improved. For sheer aesthetic drama, no car in the sector can beat the new 7, which is a confluence of bold, sweeping sheet metal. Huge, imperious surfaces rise and fall, with none of the fussy awkwardness of the old car.

A large, more streamlined kidney grille dominates the front, flanked by piercing twin-ring lights at the front of the long bonnet, while the back is rather like the Lexus LS, but with some very striking LED lamps that have a liquid quality.

The iDrive now works more logically, and it is clear that having been first to bring out one of these systems, BMW has gone back and looked at subsequent versions, especially Audi’s MMI, and learned, and then applied, the lessons.

It now works flawlessly, and the graphics are pin-sharp and stylishly designed.

So these two flaws have been rectified. As for the rest of the car, well that’s just engineers having a field day dreaming up stuff.

My personal favourite is the speed limit recognition system.

Using GPS and cameras, the head-up display tells you what the speed limit is wherever you are.

These cameras read all manner of road signs, from standard ones to variable ones on gantries and temporary roadwork signs.

It works flawlessly every time.

I’ve never been so excited to hit 80km/h roadworks on a derestricted autobahn before.

Close behind on the cornucopia of contraptions is being able to sit in the back of a long wheelbase version reading the latest developments in the world of fleet on fleetnews.co.uk, as the internet can be accessed on the large rear screens.

For the time being this is a Germany-only tool, but it will hit these shores eventually.

Squabbles between FD and MD on what to watch in the back will be no more as both rear screens can be accessed individually, so one can watch the Teletubbies, while the other is playing on a PlayStation.

Cameras on each front corner, helping you to pull out of side junctions, confused me slightly.

I found it difficult to recalibrate my mental direction, and it was a shame our test drive was conducted in daylight, because the Night Vision now picks out pedestrians up to 300 metres away by analysing heat and movement signatures, and give you a warning on the head-up display.

But under all the headline-grabbing trinketry is a very good car that should excite the driver for more prosaic, but more important reasons.

One would be the new 730d, which, with a number of EfficientDynamics technologies such as active aerodynamics, lightweight aluminium panels and brake energy regeneration, sees the car 10% more efficient than the last one, with 39.2mpg combined and 192g/km of CO2, making it the lowest-emitting car in the sector.

How low? Well, it’s a good 30g/km lower than any of the competition, which for an executive looking to make a corporately, and socially, responsible choice is a very strong incentive indeed.

On top of that, the 730d produces 245bhp, up 14bhp from the last model, and in the UK this model will take up the vast majority of sales.

The other two engines, the six-cylinder 740i and V8 750i, both have twin-turbos to maximise efficiency and deliver lots of power: 326 and 407bhp respectively, with fuel consumption also improved.

Price-wise, the new 7 Series will increase in price from the old one, but will still undercut the all important S-Class, so expect an entry-level figure of just above £54,000 on the road for the diesel, rising to nearly £70,000 for the long wheelbase 750i L.

BMW’s positioning for the car will be about the best driving experience in the sector for those executives who prefer to drive themselves, while offering an unprecedented level of comfort and technology for those who prefer to sit in the back.

All this will be backed up by a strong lower-emission message, which means lower running costs for those concerned about the credit crunch, but not actually crunched by it.

Getting in the last 7 Series for the first time, a nice German man had to give me a tutorial about where everything was and how to work it. No need here, despite the multitude of pre-flight checks.

Gearlever where it should be, music easy to set through iDrive, seats nicely heated, head-up display, speed limit recognition, lane assist and navigation switched on, suspension, damping and steering adjusted to preferred levels. Eventually it was time to actually move.

Apparent immediately was how quiet the diesel is while the damping, set to comfort, is still on the firmer side than many competitors.

In ‘sport’, it is a very composed sports saloon, not a luxury barge.

Whooshing along autobahns, there’s barely any noise apart from some around the top of the front doors, while on single carriageway roads the Integral Active Steering combined with rear-wheel steering (an option which turns the rears in the same direction as the front ones) gives the big 7 the agility of a much smaller car.

You can’t escape the fact you’re piloting a massively large and heavy piece of metal about, but it responds with amazing enthusiasm.

We also drove the 750i L, which is utterly imperious, accelerating with unceasing spirit, accompanied by a distant growl.

The interior of the 7 Series is a big improvement, and is much classier and less messy, with the black panel technology that sees graphics melt away when the car is switched off extremely smart.

The styling inside has much more of a sleek contemporary feel than old school luxury, and like the exterior, is not hampered by the over-fussiness of the last one.

The new 7 is a tour de force. Ultra stylish, superb to drive with a diesel offering unmatched in the sector.

The S-Class is the ubiquitous car in this sector, but it now has a very serious rival that is its equal, if not superior, in all areas.

For those of you who can afford one, I heartily recommend the big BMW.