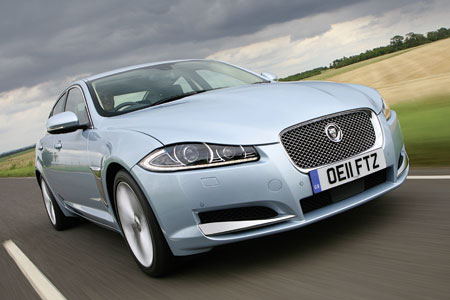 For years, fuel economy has taken a back seat at Jaguar as successive marketing campaigns majored on the performance and style values that have always been associated with the famous British sports car.

But an advanced diesel engine is now driving mpg and operating costs alongside the promotional bywords of pace and grace in the latest version of the company’s best-selling XF model.

Originally launched with a 2.7-litre V6 diesel alternative to petrol power, the car built to take on the best from Germany’s premium brands has been given a 2.2-litre heavy-oil option as the revitalised firm seeks to beef up its bid for a greater share of the company car market.

Thanks to its relatively small displacement, the first four cylinder engine to go into the XF sets a fresh benchmark in Big Cat economy with a government test cycle combined figure of 52.3mpg. That’s a remarkable feat in such a large car – but is it possible to achieve this level of parsimony in real-world conditions?

We put Jaguar’s economy claims to the test by seeing whether the car could reach Frankfurt – the heartland of the cars it is challenging in the showroom – on a single tankful. And though our route took in the M25 and the equally infamous Brussels ring road, we completed the 638-mile drive with the trip computer showing sufficient fuel remaining for a further 108 miles.

Our average return over the 1,276-mile round trip was 52.05mpg, a result that speaks volumes for the efficiency levels now being achieved by diesel engines. It also highlights how company engineers have achieved the optimum gearing with a new eight-speed transmission.

Away from the traffic queues, the car’s speedometer needle spent most of the time between 75mph and 80mph, progress that’s as good for economy as it is for mile-munching thanks to an overdrive top ratio that has the engine loafing at a leisurely 1,500 -1,600rpm.

A lower bonnet line and slimmer lamp units make the latest XF look even more distinctive and the car rewards its driver with confident handling, a finely balanced ride and a still more refined demeanour thanks to improved insulation.

In addition to soft-grain leather upholstery and trim, dual-zone climate control and interior mood lighting, details like heated and power-adjust front seats and a power-adjust steering column believe the fact that this is a lead-in model, while the spacious cabin provides a relaxing environment for comfortable, quiet and effortless long-distance travel.