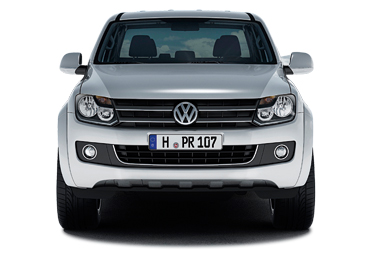 Until now Volkswagen been absent from the one-tonne pick-up class but its new Amarok is aimed squarely at class leaders such as the Toyota Hilux and Mitsubishi L200.

Deliveries start in the UK in September and volumes will be limited, though you can register your interest for one now. Having tested it in its native Argentina, we think you’ll want to, whether you need a pick-up for work, or just for ‘lifestyle’ reasons.

Its square-jawed good looks suggest V8 power but, in fact, it’s propelled by a frugal twin-turbo two-litre diesel via a six-speed manual gearbox, returning what VW claims will be a best-in-class 34.8mpg and giving a range of 640 miles from its 80-litre tank.

But it isn’t short of power; with 295lb-ft of torque, it eclipses Toyota’s 3.0-litre Hilux and all but matches the Nissan Navara.

The load bay will take a euro-pallet sideways and can carry up to 1147kg.

And with either permanent or selectable four wheel-drive – the latter comes with a low-range transfer case – it can pull all of that weight and five blokes up a sandy 45-degree Patagonian mountainside.

We know; we tried it. In less extreme conditions, it will also tow 2,800kgs.

The Amarok is at least as capable as its rivals as a working vehicle, but inside is infinitely more car-like.

Interior materials and mechanical refinement are best-in-class, and ride quality and handling are far better than you’d expect of a traditional ladder-framed, leaf-sprung truck.

There’s a full suite of safety aids; side airbags are standard, and the ESP stability control can be optimized for off-roading and includes a trailer stabilization mode.

The Amarok will be sold as a five-seat double-cab at first. ‘Lifestyle’ buyers can bling theirs out with options including leather and 19-inch wheels, but a stripped-out, rear-drive single-cab version will follow next year.

It might not have the volumes to challenge the established Japanese makers at first, but the Amarok certainly has the ability, quality and dynamic appeal. It also scores well for safety and appears to be able to hold its own when faced with harsh off-road conditions. It’s a mightily impressive first effort.