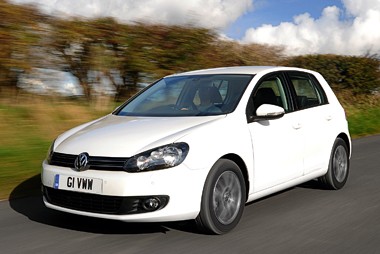 Glance below to 'weaknesses' and you'll see the thing I don’t like about the new Volkswagen Golf is its unadventurous styling.

Let’s be fair, Volkswagen hasn’t exactly thrown the kitchen sink at the design process in the transformation from Golf Mark V to Mark VI. But then again, why should it?

The old version was a massively popular user-chooser car which still looked contemporary in the sector.

So Mark VI is a gentle evolution, with the most noticeable design feature being the new look front-end treatment borrowed from the Scirocco ‘coupe’.

At the back are more prominent light units, but elsewhere it is very much business as usual for the new Golf – solid and understated.

It’s the same story inside, with that solid feeling carrying through thanks to the use of better quality materials.

What you can’t see is the increased focus on noise reduction, with measures such as new door seals and extra damping material added to cut down on noise intrusion into the cabin – a bugbear of the previous version.

And the extra effort paid off. The new Golf is refined on the move, with the cabin remaining quiet even when the diesel engine up front is at full load.

Inside the dashboard is new, but remains familiar to anyone exposed to a Volkswagen Group product over the past year or two, most obviously the Eos.

Under the body is familiar technology and underpinnings, although the diesel engine in our test car is all new.

You can feel it is 30bhp shy of the ubiquitous 2.0 TDI 140, but it’s still more than adequate for pulling the Golf about.

Once in top gear (fifth in this case) the Golf cruises in a relaxed manner, with a solid, four-square feel giving you confidence.

It’s the same when you are on more twisty roads – ultimate feel and handling may not be class-leading, but all the time the Golf feels planted on the road. Only a slightly strange feeling from the steering directly either side of the dead ahead mars proceedings.

Elsewhere the usual Golf traits remain. The boot is still a little on the tight side but for a young family there is adequate space inside.

In SE trim as tested the Golf is well equipped for the money, with standard features including 16-inch alloy wheels, MP3-compatible stereo, automatic lights and wipers, air conditioning and cruise control.

Factor in the value proposition and the Golf is hard to beat.

The SEAT looks like a strong package – it is the cheapest at the front-end and also includes satellite navigation as standard, although it is the least powerful with 105bhp. It undercuts the Peugeot and Volkswagen by £1,200, while the Focus is £400 further back.

All four cars fall into the 18% benefit-in-kind tax bracket, so the difference comes down to P11D price.

The Peugeot has the smallest wheels fitted (15-inch steel items) and, allied to 12,000-mile service intervals, spells the cheapest SMR bill over three years and 60,000 miles.

The Golf is close behind, with 16-inch alloys and variable servicing plan. The SEAT is last and needs a garage visit every 10,000 miles.

The Peugeot will cost the least in fuel terms, and is claimed to record an average of 57.7mpg. This equates to a diesel spend of just under £5,000 over 60,000 miles.

It pulls out this convincing gap thanks to its strong depreciation showing. It is also £2,500 cheaper than the Peugeot and undercuts the Focus by more than £3,000.

There is only one car in this contest and it wins easily. The new Volkswagen Golf is well priced against its rivals in the sector, scores well in all the running cost sections and then destroys its rivals when it comes to holding on to its value.

Quite simply, nothing comes close, and the fact that it is not the cheapest in company car tax terms is something of an irrelevance (it is £4 a month more expensive than the SEAT).

Factor in a fresh design, a strong brand image, proven mechanicals underneath and an efficient new diesel engine and the Golf really does set the standard for all to follow in the lower-medium market.