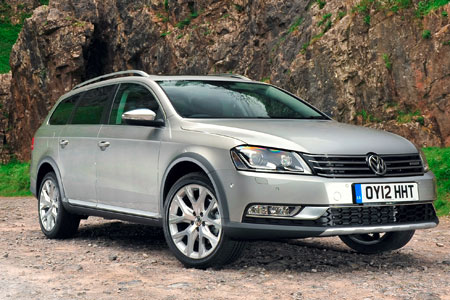 If four-wheel drive vehicles had disappeared from some choice lists over the past few years due to high CO2 emissions and fuel consumption, it could be a good time to reappraise the policy.

Improvements in fuel consumption and cuts in emissions in recent years, helping fleets to offset higher fuel prices and allowing them to achieve lower CO2 targets, have happened across the board.

And a few harsh winters in recent memory have also led to some re-evaluating requests by drivers for a car with four-wheel drive ability.

These days you don’t have to go down the conventional SUV route to deliver more four-wheel drive ability than most drivers will ever need.

An increasing number of traditional saloons, hatchbacks and estates are being offered in four-wheel drive variants.

Volkswagen’s preference with the Passat is to also deliver increased ground clearance on its all-wheel drive Alltrack, as well as an increased towing limit (2,000kg maximum braked towing weight instead of 1,800kg on a Passat estate).

It has a range of rivals, including the Skoda Superb estate 4x4 (which does without the extra ground clearance and rugged styling), the Audi A4 Allroad and the Peugeot 508 RXH diesel-electric hybrid.

All have a degree of off-road ability and all provide extra security on the road in slippery conditions.
Standard equipment on the Passat includes Alcantara upholstery, dual zone electronic climate control, cruise control, tyre pressure monitoring system, front and rear parking sensors, colour touchscreen satellite navigation, iPod connectivity, Bluetooth and 18-inch alloys. Safety features include a Driver Alert System which detects fatigue and recommends taking a break when it feels one is needed.

One of the surprising things about the Passat Alltrack is that it feels little different from driving a Passat estate from behind the wheel.

You barely notice the extra two inches of ground clearance and given that these modifications are so modest, there isn’t really a sense of it being unwieldy when cornering.

Engine refinement is excellent. Although I know Volkswagen doesn’t offer a petrol Passat Alltrack in the UK, I still had to check for a TDI badge on the tailgate after my first brief drive.

The six-speed DSG is smooth and doesn’t have a negative impact on fuel consumption or CO2 emissions.

The Passat Alltrack’s premium pricing shouldn’t be a concern for Volkswagen. It’s roomier than an A4 Allroad, and has a lower P11D value than the Peugeot 508 RXH, although the latter comes with the benefit of lower BIK tax thanks to its hybrid powertrain.

The Volkswagen has much appeal, and should satisfy most requirements for a vehicle needed for rough terrain or towing with little of the cost and tax penalty associated with SUVs.