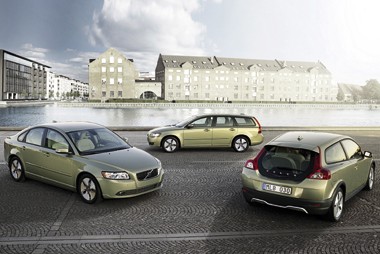 Lowered suspension and a prominent spoiler used to identify the sporty models in a car range. But in these eco-conscious times, looks are becoming deceptive.

Volvo’s trio of DRIVe models have those styling cues, but with a different purpose. They’re all about honing the cars’ aero-dynamics to lower their CO2 emissions, drop a VED band and cut drivers’ benefit-in-kind tax bills.

These are the latest in the list of greener models that manufacturers are devising in the chase for lower emissions.

All three models have had their ride height lowered by 10mm. Wind deflectors have been introduced behind the front grille and ahead of all four wheels. The wheels themselves are smoothed-off alloys, shod with low-rolling resistance tyres.

The gearboxes have revised ratios on third, fourth and fifth. The engine ECU has been reconfigured to ensure everything runs efficiently without overheating.

Of the three, the C30 DRIVe has undergone the most changes. It has been given a unique rear spoiler to smooth off airflow, new rear bumper and flat underbody panels to reduce under-body drag.

The changes make negligible difference to the way the cars drive.

In fact, there is a slight benefit in performance: the C30 DRIVe, for example, accelerates half-a-second quicker from rest to 62 mph than the 1.6D model on which it is based.

The slight drop in suspension means that you have to be a touch more wary negotiating speed humps. Those low-rolling resistance tyres contribute more than 2% to the car’s efficiency improvements, but have a slightly less grippy feel on the road.

Tweaked to duck under the 120g/km of CO2 figure, Volvo’s DRIVe models are a canny move. This drops them down a VED band to B, qualifying for £35 a year road tax.

Drivers will also benefit from the 13% BIK tax banding. They’re changes worth having with few downsides.