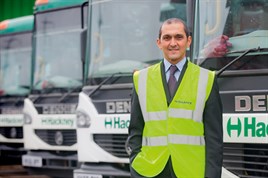 It has saved hundreds of thousands of pounds by changing the way it manages its fleet, but the London Borough of Hackney has no intention of resting on its laurels.
Hackney has recognised the buying power that a co-ordinated procurement programme can achieve and is now looking to take it to the next level.

But until recently, individual departments were responsible for sourcing vehicles, something which the local authority’s corporate fleet manager Norman Harding was keen to change.

Harding joined the council in February 2007 and was the first permanent member of its then newly- formed fleet management unit.

“Like all local authorities, there are numerous departments providing a range of different services and in the past each one of those departments had its own budget for procuring vehicles,” explains Harding.

“How they managed their drivers was up to them. There would be a nominated person within the department, who wouldn’t necessarily be a tran-sport professional.

“Their skills remit would be based on their frontline services, but they would also have the added responsibility of making sure their drivers and vehicles were managed appropriately. However, they didn’t have the right skills to do the job and that was recognised by the senior management team, which initially decided to centralise the compliance function.”

That resulted in the creation of the fleet management unit – a five-strong team consisting of Harding, his deputy, a fleet engineer and two administrators.

It sits within the council’s finance directorate and, while its initial aim was to make sure Hackney did not fall foul of the law, it became crucial to a root and branch review of existing practices.

“When I first came here I recognised the council had a very comprehensive health and safety policy, but I felt it needed to be developed further to include vehicles,” says Harding.

“I drafted a separate safety policy – an occupational road risk policy – which now means there is a whole raft of guidance notes available to drivers and managers.”

Hackney’s work in this area resulted in it becoming the first local authority in London to be made a ‘business champion’ under the Government-backed Driving for Better Business campaign, which is delivered by RoadSafe.

Caroline Scurr, campaign director, says: “With the creation of the fleet management unit, Hackney Council bridged the gap between creating a health and safety policy embracing at-work driving safety and ensuring procedures are carried out on the frontline.
“Through its actions the council has created a roadmap which is a significant step forward in occupational road risk management within the public sector.

“Our business champions have a crucial role to play in promoting occupational road risk management across the UK, and Hackney Council is now a beacon of best practice that other local authorities would do well to follow.”

Legal compliance is only one aspect of the fleet management unit’s responsibilities. It now advises all departments on the benefits of shared procurement.”

“We still allow each individual department to manage their budget,” says Harding, “but we advise them on replacement programmes and we will co-ordinate that programme with all departments so we can capitalise on volume-related discounts when we go out to procurement.”

It has already paid major dividends, with savings of around £700,000 achieved on a four-year framework contract for about 250 light commercial vehicles across several council departments.

Further savings have also been achieved with fleet-related services, including tyre suppliers and accident management.

“I’m now market testing all sorts of formulae procurement, not just contract hire, but operating lease, prudential borrowing and even outright purchase if we can find the capital,” says Harding.

Having recognised the benefits of a co-ordinated procurement programme within Hackney, Harding now wants to work with other local authorities when sourcing vehicles.
“There must be the potential for a lot of savings if local authorities that are providing fleet-related services can agree on specifications,” he says.

“However, I think that a number of authorities operate on a silo basis and are reluctant to collaborate because they think that they have to change the way they do things. “But, with minor adjustments, there could be major savings” Harding adds.

The London borough is employing a long-term strategy of migrating its vehicles to operate
on biodiesel.

"We already operate with a 5% blend and we’ve done that for many, many years – long before it was available on the forecourt," explains Harding. "But we’re also planning to operate 30% and 85% blends.

"We tendered the supplier late last year who assures us that they can supply those blends from sustainable sources and we’ve installed a three-compartment bunkered tank to accommodate them."

However, he admits that manufacturers were initially wary of his desire to go down the biodiesel route.

"I continued talking to them and they recognised that was the direction I wanted to
go, so slowly, but surely, they’ve started to come on board," he says."However, from a light commercial point of view it’s really only Citroën and Peugeot that are supporting the 30% blend and as a result we’ve a handful of Peugeot Partner vans joining the fleet."

Harding carried out a lot of investigatory work where the alternatives were concerned, like the variations on gas, but felt the infrastructure just wasn’t there.

"We used to run a few LPG vehicles, but we found refuelling was very difficult," he says. "However, with the biodiesel route this isn’t an issue and there’s definitely an environmental benefit because you’re moving away from fossil fuels.

"It’s a sustainable fuel, it requires minimum modification to our vehicles and our support infrastructure and I think by this time next year at least half of our vehicles operating out of this depot will be using 30% biodiesel."

As it develops its biodiesel capabilities, Hackney will also take delivery of an electric van and three hybrid-assist vehicles this month.

The vehicles have been sourced through the Low Carbon Vehicle Procurement Programme, managed by Cenex on behalf of the Department for Transport.

Hackney is part of an east London consortium of neighbouring boroughs to create the requisite fleet size to take advantage of the scheme.

"It’s been hard work, but it’s great to be involved at such an early stage where we will
be able to help steer the programme," says Harding.