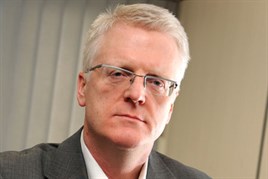 Charlie Shiels takes a rudimentary approach to cost control. “Our attitude is that if we can do 100 things 1% better it will add up to savings on our fleet,” says the executive director – central operations at
GeoPost UK.

GeoPost is owned by the French post office, La Poste, and includes the parcel delivery brands DPD and Interlink.

DPD alone performs 20 million deliveries a year to home addresses and has 1,900 vans so the price of fuel is “a big problem”.

The company has introduced a number of measures to tackle fuel costs. Since 2009 it has run a ‘drive smart’ campaign to encourage drivers to adopt safe and fuel efficient driving methods.

GeoPost has introduced a monthly league table of drivers’ fuel consumption awarding vouchers to those who improve their efficiency.

“You tend to get a big benefit and then an incremental benefit,” he says. “If we achieve another 2% to 3% this year I will be delighted.”

GeoPost has been trialling Mercedes-Benz’s ExcelArate technology, which limits the driver’s ability to accelerate, in three vans in Birmingham to see if it will bring further fuel savings.

The results so far have been “disappointing” as there has been no improvement in fuel consumption.

However, Shiels says “the jury is still out” and he will look to trial ExcelArate in other vans elsewhere.
The company has also downsized its residential delivery fleet, opting for vans that are 40% smaller.

Savings should come from upfront cost, better fuel consumption and potentially less vehicle damage as smaller vans will be easier to manoeuvre and park in residential areas.

Two years ago it launched Predict – a service that aims to deliver parcels within a one-hour window.

Currently 98% of parcels are delivered within that time-frame and the majority of depots are achieving 100%.

The company invested more than £2 million developing the technology needed for the service.

“It’s a combination of satellite navigation, parcel technology and route optimisation,” Shiels explains. “It basically tells the driver which order to do the deliveries in.”

The technology has resulted in the average carbon per parcel reducing by 15% and an increase in the number of parcels on each delivery route.

But other fleet operators won’t get their hands on this technology.