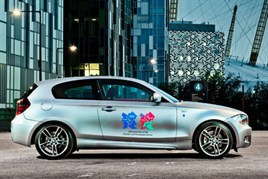 Managing 4,000 vehicles and 9,000 drivers, John Fryer has a crucial role to play in the self-proclaimed 'greatest show on earth'.

Fryer is the fleet services manager for the Olympic and Paralympic Games – a role at the heart of the London Olympic Organising Committee (LOCOG).

Fryer and his 400-strong fleet team, together with 9,000 volunteer drivers, are charged with making sure athletes, officials and dignitaries arrive on-time to stadia across the country.

From a standing start, he is now overseeing one of the biggest fleets in the UK, with 4,000 vehicles of all shapes and sizes serving venues stretching from Hampden Park in Glasgow to Weymouth Bay and Portland Harbour on the south coast.

“There are obviously challenges in delivering a transport operation on this scale, but I’m supported by an excellent team of people who I can completely rely on,” says Fryer.

He is no novice: Fryer has a history of being parachuted in to oversee the fleet requirements of some of the world's biggest sporting events having been head of venue transport at the Asian Games in Doha, fleet manager at the Special Olympics Games in Dublin and logistics manager at Sportcity in Manchester for the Commonwealth Games.

He joined the Olympic Delivery Authority (ODA) in April 2007 working on the transport strategy for the Olympic Park before joining LOCOG in August 2009 and taking overall responsibility for fleet.

It’s an adrenaline fuelled role Fryer clearly relishes. “At games time it’s a big buzz and it doesn’t get much bigger than the Olympic Games.”

He reports to the head of transport operations at LOCOG, who is answerable to the director of transport, Richard George.

The vehicle services team looks after the logistics of the Olympic fleet, which includes vehicle commissioning, their subsequent delivery and their return once the Games are over.

Fleet operations is charged with the actual transport requirements; matching cars with drivers and making sure service levels are met according to service level agreements.

Finally, the fleet systems team is effectively the client interface, responsible for understanding customer requirements, including individual vehicle needs for the likes of security and catering.

At Games time, approximately 400 people will be employed to deliver these services while Fryer explains the drivers are all volunteers.

“Drivers came through the Games Makers recruitment programme, which everybody who wanted to volunteer for the Olympic Games went through,” he says.

Fryer has been allocated 9,000 volunteers and began the process of checks and training two years ago. He created LOCOG's fleet policy from scratch, drawing on his previous experience.