In the spotlight: Paragon Group 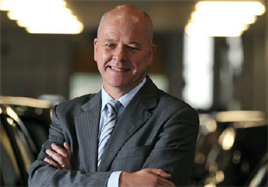 Mike Pilkington believes Paragon’s online sales channels will move the market away from the auction houses, he tells Stephen Briers

Traditional auction house companies’ dominance of fleet remarketing could soften over the next few years as online alternatives open up a more direct route to the private market. That’s the view of leasing companies, although their opinions differ as to the speed and extent of the change.

One told Fleet News: “We see an increase in online purchasing. By 2020, auction houses will not be the main route to market. We will be entering via other partners, which will remove the intermediary and improve our margins.”

However, others point to the advantages of auction houses handling all the processes around the sale, including vehicle movements, refurbishment and infrastructure – all of which is able to accommodate thousands of vehicles a month.

The Paragon Group is one of the companies hoping to accelerate a move away from the traditional auction arena.

The business has three main operations: de-fleet and refurbishment of manufacturer and rental used cars – it handled more than 135,000 vehicles last year for a 70% share of the market; in-life management of manufacturers’ company cars, such as Jaguar Land Rover and Nissan, including their press and fleet demonstrators; PDI cars imported to the UK for Fiat, Dacia and Toyota, plus some end-of-line work for Vauxhall vans.

He believes the remarketing sector is ripe for a transformation, one that will be driven by the use of the internet to facilitate vehicle search and transactions.

Others have tried it before, notably Autobytel in the early 2000s and, more recently, Tesco Cars (which purchased Carsite) and Autoquake.

No one has made it work, although traditional remarketing companies such as BCA and Manheim offer a growing proportion of their sales via online bidding.

Why is it different this time? According to Pilkington, part of the reason is the fact that leasing companies are looking for new routes to market. Technological developments are also facilitating moves towards new remarketing processes.

“From a leasing company’s perspective, they want to get cars closer to consumers and earn more margin more quickly but without owning retail sites,” Pilkington says.

“The remarketing process is too complex; someone has to make it simpler.”

Paragon recently entered into a request for information with a large leasing provider which wanted to reassess its de-fleet process. One option of interest was to put vehicles into refurbishment centres and sell online rather than sending them to the auction house.

“The company backed away from this because there wasn’t sufficient critical mass of online sales channels to make it economical,” Pilkington says. “In the not-too-distant future, that could happen.”

He predicts a remarketing structure whereby the end-of-contract appraisal is carried out at the fleet’s premises and damage recharges agreed before the vehicle is taken away. Based on the condition report, model type and mileage, the vehicle could be routed to the most appropriate remarketing channel – auction house or de-fleet centre – for refurbishment and sale online.

“Paragon is working toward a world where a vehicle can be inspected, imaged and loaded onto a real-time database that is accessible to dealers,” says Pilkington.

“It will radically change how manufacturers and fleets manage the de-fleet and remarketing process – the end-of-life process can be reduced to days rather than months.

“It’s an interaction that is not too far from our grasp today, probably the next year or two,  particularly for manufacturer-owned captive finance houses – they will push cars through the open market format.”

There are obstacles to this, not least the logistical costs of moving cars, but Pilkington predicts higher residual values by shortening time to market, which will help leasing companies to make more money and give them a competitive advantage when quoting for contract hire rates.

“We have to be able to sell the car where it lands, rather than where it ends up, to combine remarketing with location,” he says.

“When is a car sold? Is it when a buyer does the online research and narrows down the list or is it when they go to the dealership to make the purchase? There will always be a physical interaction, for example handover or part-exchange, but there’s a lot that can be done online – you can almost get the buyer to the wire.”

Paragon’s priority is to ensure its existing physical organisation is attractive to all types of business, from leasing company to manufacturer, while developing its own software to support new processes, working in partnership with other suppliers where necessary.

“Technology is enabling us to think more creatively about how we can add value,” Pilkington says. “It is enabling us to create a transparent and more interactive de-fleet process and feed data further up the used car value chain.

“We have put innovation at the heart of our model and have a rolling quarterly schedule of launches. This includes a major enhancement of our Intellifleet product in the coming months.”

Among future systems developments will be an ability to link data from the retail sales process to inform dealers and manufacturers about what used cars are being sought in any given area. This will help manufacturers to profile cars into an area more effectively and speedily.

The growing trend for new cars to be sold on personal contract purchase (PCP) schemes in the retail and SME sectors will make the ability to match models to the areas of greatest demand increasingly valuable for manufacturers.

Leasing companies fear PCPs could push people into a replacement cycle much shorter than they are used to, with a greater number of cars returning to market after three, or even two, years.

Some dealer-owned groups are already seeing a gap appear between new and used sales volumes as a result, which is starting to affect residual values of ex-fleet stock. As a result, a number of groups have started to soften forecasts by a couple of percentage points or so.

Pilkington recognises their concerns and says the situation could be exacerbated because dealers are not used to handling large quantities of two-year-old cars. The forecourt model mix tends to be dominated by cars up to 18 months old and those more than three years old.

“Manufacturers will have to drive demand for two-year-old cars coming back into the market. It could be in significant numbers and they have to have created a market,” Pilkington says.

“The record volumes of new vehicle sales driven by PCP will provide challenges when the residual value cycle reaches a low point. This will create significant volumes of two- to three-year-old stock that manufacturers will want to ensure as much as possible is sold by their franchise.

“Paragon will ensure that there is sufficient capacity to support this goal and ensure that these vehicles can be refurbished to maximise franchise sales.”