Insight: Police fleets of the future 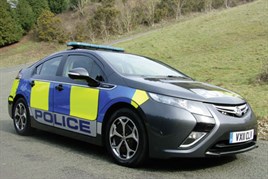 All organisations have had to adapt to survive over the past few years with many looking for savings that don’t harm front-line services. Inevitably, though, it’s impossible to protect everything from cuts.

But for police fleets – collectively the UK’s largest buyers of forecourt fuel, and a commodity whose price continues to rise – the expectation to protect front-line services is greater.

Police vehicles of the future could be a key factor in ensuring frontline services are pre-served and how they will be able to perform the role of a mobile office, carry out new functions, and become less reliant on conventional fuel.

Vauxhall won a competition run by the Association of Chief Police Officers Intelligent Transport Systems (ACPO ITS) to demonstrate an electric vehicle that uses cutting-edge crime-fighting technology that could be introduced into active police service by 2015.

Vauxhall showcased the Ampera in police livery featuring the latest policing equipment on the Home Office’s Centre of Applied Science & Technology (CAST) stand at the Police & Security Conference in January.

This isn’t to say police forces will be taking on Amperas by 2015 – the technology can be adapted for any vehicle.

However, the Ampera, given its unusual way of using electric power and the fact that it’s about to launch in the UK, is an ideal shop window.

Vauxhall is a member of the One Box Consortium working with ACPO ITS, which provides a standardised specification to which all manufacturers and suppliers can adhere, allowing them to produce common wiring for equipment and connection points.

This allows plug and play of electronics, reducing the time needed for equipping and decommissioning vehicles.

Chief Superintendent Jim Hammond, of ACPO ITS, said: “We looked for how we can use new technology in police vehicles and started to look for a replacement for the instant data rec-order.

"We were trying to create a standard technology platform as well as ways of driving down cost.

"We hoped to create a lot of interest among vehicle manufacturers and Vauxhall produced this concept vehicle.”

One of the first parts of a vehicle conversion to become a police car is for a large square hole to be cut into its dashboard to accommodate the information screen.