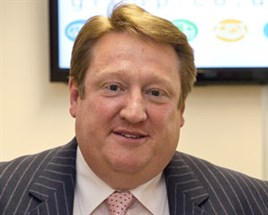 What is your biggest achievement in your current role?

Launching LiteLease, our flexible rental product. The economy was looking for flexible solutions and we had the right product at the right time. It continues to be a great success.

Probably my dad. He taught me to respect other people’s views and to treat people as you expect to be treated.

Menorca. It is such a relaxing, unfussy place, and it’s a short flight. I’ve got great memories of many visits there.

I don’t watch too much TV these days. I’ve got enough reality in my life, so I don’t feel the urge to watch anyone else’s. It’s probably Only Fools and Horses which was just hilarious and so 1980s – my favourite era.

Easy, but don’t laugh: Summer Holiday with Cliff Richard. It’s so upbeat with great singalong music. My sister bought me a signed soundtrack for my 40th and it’s got pride of place in my home office. I’m not sure I’ll live this down!

You are going to a desert island – what three things do you take with you?

A barbecue, a fishing rod, oh and the wife as she does the cooking.

When did you last use public transport?

On Saturday I took the train to London. It’s only one-and-a-half hours from Stoke – unbelievable. Stoke is now a London suburb.

Get the homeless into the mass of empty property that is available.

What was your biggest mistake in business and what did you learn from it?

Probably attempting to put square pegs into round holes. It just doesn’t work.

A grand piano. My son plays and I know he would like a really expensive one.

What is your favourite restaurant dish?

Rib eye steak and fries with pepper sauce, I’m a meat lover, the waistline proves it.

Gridlock by Ben Elton, which takes a different look at the motor industry.

So many, but probably my dad buying a new Jaguar.

Getting cabs around London when walking would be better for all.

What would you say is your guilty pleasure?

Starsky and Hutch. They were cool and the Ford Torino was something else.

Which historical character do you most identify with?

Winston Churchill. He was always ready for the battle and prepared to roll his sleeves up and get involved.

Don’t burn the candle at both ends, you get a brighter light but it only lasts half as long.

What one object couldn’t you live without?

A laptop. It makes work so much more portable.

If you could work in another profession what would it be?

Anyone that knows me will know that I can’t answer this question.

Which comic superhero would you most like to be?

Batman, just for the car.

What has been the pivotal moment in your life?

Leaving one of the UK’s leading lease providers to set up in business on my own, David and Goliath comes to mind. It just goes to show that with the right mindset you can make anything happen.