Was this article useful?
Click the thumbs up >
IN the battle for fleet business, volume is not longer the driving force behind the market. Profit has to take the lead if the industry is to prosper.

That is the message from Keith Hawes, Renault director of fleet and commercial vehicle sales, who warns that the practice of forcing massive volumes on to the market to meet sales targets is still used by some rivals, but insists Renault has stopped playing the ‘market share game’.

He said: ‘Our aim is to achieve volume, meet budget and achieve a bottom line profit. We are very much focused on the bottom line.

‘So we are looking at how we can improve our model mix and options fitted when we negotiate to put cars on policy lists. It benefits everyone because vehicles will have a lower rental cost because they will higher residual values.

‘So the customer is getting a much better proposition, there are better RVs and we are making a better margin.’

It is a strategy that can work for niche models, such as the profitable Megane CC, but also for ‘bread and butter’ models when sold with higher specification.

This has raised serious questions for Renault about its level of involvement in some important market segments that used to represent substantial volume, such as the bodyshop sector. Hawes said: ‘The bodyshop market can’t sustain £99 a month rentals. I can’t believe there is any profit in it for manufacturers at all.

‘From my perspective it isn’t profitable to see thousands of cars put into auction after 12 months. A lot of contract hire companies have been into that business and are pulling back.’

So what areas of fleet business will Renault be targeting in future?

Traditional volume business is still on the menu, according to Hawes, but it must be carefully managed, with the right cars going in carefully managed volumes to the right partners. Small business users are a particularly important market and success depends on working closely with local dealerships to deliver the right services and the highest standards.

This will be backed by cars such as the new Clio, set to have a major impact next year, along with increased demand for new Laguna, while the firm is expecting sales in the van market to grow.

But once again volume will give way to quality business, the firm says. In September, Renault revealed it was expecting to give up around 10% of its share of registrations in the supermini segment as a result of reduced profit margins.

Like its rivals, Renault has been competing for business with the NHS, public sector, Motability, driving schools, courtesy car and daily rental fleets. While it was difficult enough to keep in the courtesy car area with Clio II, this sector is now a no-go zone for the new car, the firm said.

Hawes said: ‘To be profitable, you must make good quality product and have good service. The problem is that this is such a competitive market.’

Renault is also going to change the way it talks to customers, with the launch next year of a new customer relationship management strategy, which has been in development for more than a year. Hawes said: ‘We are changing the way we work in the department, how we categorise customers and how we allocate leads.

‘Out of a database of 15,000 customers, sales people visit the same people time and again. They need to talk to customers when they should be and not someone 10 times a year who they have nothing to talk to about.’ 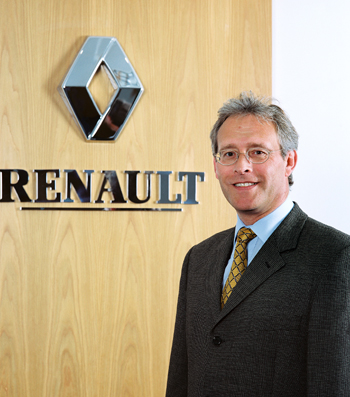