Was this article useful?
Click the thumbs up >
ONE of the biggest names in remarketing, BCA is celebrating 60 years in business.

Now synonymous with fleet disposal, the firm has come a long way since its first auction at Frimley Bridges, Hampshire, in November, 1946 – a sale that sold 14 cars and raised £2,300.

BCA headquarters is now five miles away at Blackbushe Airport. These days, the firm handles some 1.3 million vehicles a year and has a turnover in excess of £3.3 billion.

From its roots in the aftermath of World War II, BCA embarked on a programme of acquisition to build the first national network in the UK. By 1960, it had 10 auction houses and was turning over £10 million a year.

Senior auctioneer Graham Smith has worked with the company since the early 1970s and has seen the fleet industry grow from humble beginnings to today’s multi-billion pound industry.

He says: ‘It’s hard to imagine now, but in the 60s and 70s there really was not much of a fleet industry to talk of.

‘Anyone who had a company car had it as a working tool and the car manufacturers were firmly focused on the private motorist for the vast majority of their business.’

But a pay freeze instigated under prime minister Ted Heath in the early 70s saw the introduction of the perk car in lieu of salary. Suddenly, staff were getting cars as part of their remuneration package.

At the end of their working lives, these vehicles were coming to market at a lower mileage and in better condition than had been seen before, effectively creating a new category of used vehicle – the fleet car.

Smith says: ‘Fleets were all wholly-owned – there was little contract hire at this time – so responsibility for selling vehicles lay with the fleet manager, who was largely left to his or her own devices at this stage. With no real idea of value, many looked for the easiest route out.

‘It was often left to the motor trade to handle the bulk of these sales by buying direct from the fleet operator.

‘The trade then brought these desirable vehicles to auction or sold them to underwriters, often for substantial profit.

‘Even finance houses would sell repossessed vehicles direct to the trade, until legislation forced them to put greater transparency into this process and auction began to be widely utilised.’

As the volume of vehicles from fleet sources grew in the 70s and 80s, BCA introduced a number of initiatives designed to help sellers maximise the values of their defleeted stock.

The firm was the first to provide in-house valeting and preparation facilities at all of its locations and provided on-site body and paint services at selected centres.

Themed sales began to make an appearance, lumping similar stock in together for buyers’ convenience and in 1981 the first manufacturer closed sales – selling directly from carmaker to dealers – were held with Ford.

Smith says: ‘By the early 80s, BCA was getting a greater slice of the company car business by developing services that added real value for the vehicle owners.’

‘The mantra at this time was: ‘We collect it, clean it, sell it and pay you in seven working days’.

‘To do this, we had a nationwide network of auction centres – wherever you were, a BCA centre was close at hand.

‘For the first time, the growing fleet industry had some options when it came to selling their vehicles. Many chose the auction channel because it offered transparency, an audit trail and delivered the enhanced values that the trade were previously keeping to themselves.’

The 70s and 80s also heralded the march of technology, when the industry saw the introduction of faxed pricing and later data-broadcast and on-site decoders at customer premises.

The early 1990s saw a few wrong turns as it grappled with ever-faster computers and the burgeoning satellite industry.

‘The industry took a few detours up blind alleys, particularly when the technology improved in the early 1990s,’ Gannon says.

‘It suddenly seemed that anyone with a computer was claiming they could sell fleet cars, while satellite technology proved to be a prohibitively expensive way of selling cars – we know that from experience.

‘In fact, the switched-on players were waiting for the internet to catch up with the hype of the ‘information superhighway’.’

The internet would eventually provide real opportunities in remarketing and in 1997 BCA launched its website with an online stock locator, catalogue and auction composite service – all firsts for the industry.

The online offering was upgraded as time and technology advanced, with CAP and Glass’s Guide price comparisons, while the Live Online system allowed internet customers to bid with buyers in the auction halls.

Smith said: ‘Many developments have been below the line – the advent of the internet served not just to sell vehicles but to pass huge volumes of information seamlessly between companies.

‘Increasing computing power means sellers get reports the instant a sale section is concluded.But perhaps the biggest change has been in the balance of power in the used car market.

‘By using remarketing specialists to handle the huge volumes of used vehicles the fleet industry began to produce, the asset owners – the fleets – were no longer beholden to the motor trade. They had control and were able to take decisions about how and where the vehicles were sold.’

Today, the firm is one of the biggest players in the UK and has successfully expanded its operations into Europe.

Despite such a long and successful history, BCA has no intention of resting on its laurels.

‘We have always strived to be at the cutting edge of our industry,” says Gannon.

‘We work in a competitive, transparent wholesale marketplace and if you get it wrong, there’s nowhere to hide.

‘The vast majority of the volume we handle is sold in open auction – it’s a public arena that attracts the utmost scrutiny from vendors, buyers and the many specialist media serving the marketplace.

‘Looking ahead, we will continue to expand our network with a new centre in Hungary providing the staging point for increased business in Eastern Europe, and commitment to increase the company’s presence in the key French and German used car markets.’ 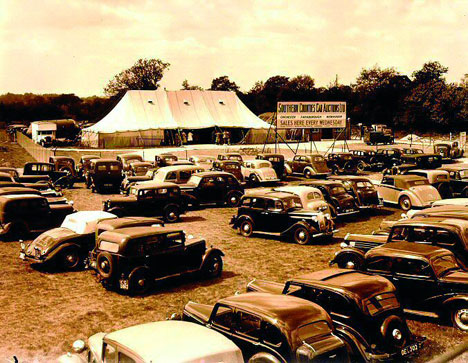 The 1940s saw post-war drivers flock to the Morris Minor MM (above). A used 1948 example could be picked up at trade value for £465. Such was demand at the time that used prices often improved on new.

Signs of the times: