Was this article useful?
Click the thumbs up >
Fiat is aiming to grab a slice of the growing market for upmarket passenger transport.

What with an increased awareness of the dangers of drink-driving and a burgeoning need for high-powered people to be transported hither and thither, the market for executive passenger transport is growing apace.

At present, the Germans seem to have the market largely sewn up, but Fiat has just launched a new contender than could see things change.

The new Panorama is a luxury version of the Scudo light panel van, featuring seating for up to nine people and a generous specification. It goes on sale alongside a rather more basic Combi version.

The new model is available in short and long wheelbase formats, although the Scudo’s high roof versions won’t be available.

Fiat’s 2.0-litre MultiJet diesel offers a choice of 120bhp or 136bhp, mated to a six-speed gearbox.

An automatic box is not available, although Fiat officials have not ruled out this addition in the future. 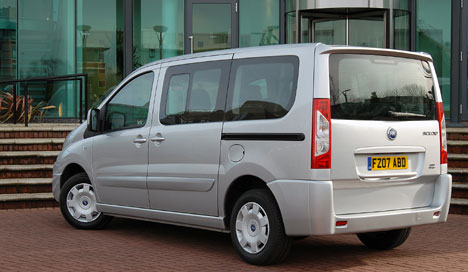 All versions of the Panorama were available for driving at the launch in Turin.

Thanks to the thick carpeting inside, the ambience is quite different from that of the panel van – a hushed, upmarket feel which will appeal to busy executives who need to get from A to B and maybe do a bit of business at the same time.

But with nine seats up and in short wheelbase format, there is little space for luggage in the rear – just 327 litres.

We’d recommend the long wheelbase version – which boasts a more respectable 770 litres – if the maximum seats are being specified.

Taking all the rear seats out boosts load volume to five and six cubic metres respectively.

There is not a lot of legroom for the third passenger in the front row either. Versions we tested with two single seats here were much more comfortable.

The seats in the back are stepped so that rear passengers can still see out of the front.

The second row is 7cm higher than the first and the third row is 3cm higher again.

The two rear rows of seats are split into a single and a double so either can be taken out separately.

But they are heavy and it’s no easy task. Meanwhile there are plenty of cup holders and cubby holes, including two handy overhead storage lockers.

Out on the twisty mountain roads round Turin, the Panorama showed itself to good effect.

Switchback corners were taken effortlessly and at no time did the van struggle, even on very steep slopes.

While the 136bhp version is obviously faster, with bags of power on tap, the 120bhp version should prove adequate for most UK needs. 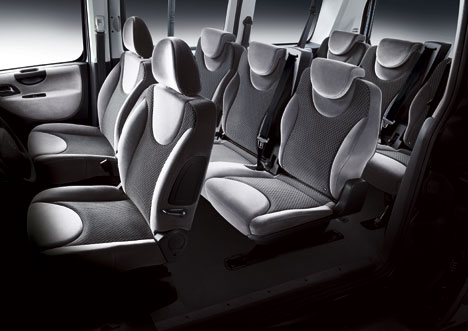 The Panorama looks good on the outside and provides a comfortable ambience for passengers.

But the Fiat marketing men will have their jobs cut out to persuade current buyers out of their Mercs and VWs.