Was this article useful?
Click the thumbs up >
RENAULT has a plan – and Britain’s van fleets will play a crucial role in making it succeed.

He is not giving too much of it away, although to say the cornerstones of its success are quality, profitability and growth doesn’t spill the beans.

An important aspect of meeting the targets set behind closed doors will be the commercial vehicle division of Renault, as it now accounts for 20% of the firm’s business.

According to Bruno Morange, the vice-president of the firm’s LCV division, there will be a new drive for quality in Renault’s van range, with a particular focus on slashing vehicle off-road times and improving customer satisfaction. In fact, it wants to be number one for customer satisfaction and vehicle off-road times when compared to its rivals in Europe.

This makes the new Renault Trafic a pretty important bit of kit for the firm, as it is the first step towards achieving the above goals.

The Trafic, which shares a platform with the Vauxhall Vivaro and Nissan Primastar, has sold 233,480 units since the first model appeared in 2001, with more than 79,000 shifted in 2005 across Europe.

So as it’s already popular, you can understand why the designers haven’t fiddled with a winning formula very much for this facelift.

From the outside, there are some mild tweaks to the grille, indicators and headlamps and that’s about it. It is still an attractive vehicle and it avoids the move among the German brands to a more bold, brash and brutal appearance. If anything, the front looks slightly more dainty.

Step inside and the cabin quality has taken a step upwards, with standard specification including a CD-player with remote control, ABS and electronic brakeforce distribution, remote central locking with deadlocking, alarm and immobiliser.

Options include emergency brake assist, deactivation of the (optional) passenger airbag, rear parking sensors, intelligent wipers and a three-button key. There is also the option of a third key, particularly useful for fleets with pool vans or careless drivers.

However, it is under the skin that Renault has made the most significant changes, with a Euro IV-compliant 2.0-litre diesel engine, available in two versions, 90bhp and 115bhp. Both new engines come with a six-speed manual gearbox and the 115bhp version will shortly be available with an improved version of the Quickshift6 robotised transmission. 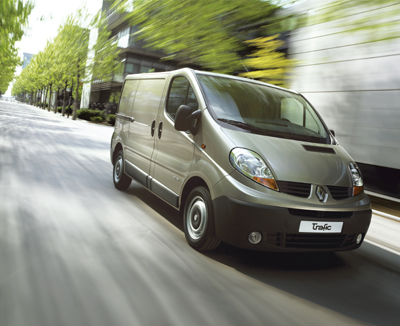 Speaking to a Renault executive the night before my test drive, he kept referring to the Trafic as a car.

As he was speaking with a heavy French accent, I forgave him the slip-up, particularly as the firm was keen to promote a people carrying version of the Trafic, called the Generation.

However, I had to groan after spending five minutes behind the wheel when I realised I would have to roll out what is becoming an over-used phrase in the LCV market at the moment – it really was like driving a big car.

Now before you throw this magazine across the room, let me explain why the Renault – and the Vauxhall Vivaro that shares the same platform – is different.

We only tested the diesel 115bhp version, but when one drove past me in the parking area, it sounded like a petrol engine, such was its level of refinement.

And when I took to the road, even though we were dragging a half load of sand behind us, the engine was almost silent at 70mph. Quieter than some cars in fact.

The dashboard wouldn’t look out of place in a large car. The seats were firm and supportive (unlike those in some French cars) and the steering wheel was easy to reach and adjust.

Gearchanges were light and the engine pulled strongly almost to the 4,000rpm mark, when there was a sharp drop-off in power.

The mirrors provided excellent vision and manoeuvring was easy.

Life was even easier with the Quickshift gearbox, which has almost reached the level where changing is seamless. Treat it gently and it is so good that you will never want to drive a manual again.

In the rear there were plenty of floor hooks available to keep cargo in place and ply lining is £170, which seems reasonable.

Verdict
There is a danger that drivers are becoming spoilt with all the great vans appearing on the market. The Trafic feels as close as you can get to a car without actually sitting in one.