Was this article useful?
Click the thumbs up >
An electric-powered Ford Transit has been officially launched in the UK, aimed at the growing number of fleets which want to reduce their carbon footprint and save money at the same time.

Smith Electric Vehicles gave the new van – called the Edison – its world premiere at the show and the firm reckons it will sell 1,500 of the vehicles next year.

Interest in electric vehicles has grown dramatically of late as battery technology improves, costs reduce and pressure grows on fleets to run lower emission vehicles. But one thing that has impeded the growth in sales is the rather kooky looks of some of the vehicles on offer so far.

Smith chief executive Darren Kell (pictured) said: ‘We produced a vehicle called the Faraday which was technologically spot-on and very cost-effective, but its looks were unacceptable and the drivers just didn’t want to know.

‘We realised we needed a van which drivers were comfortable using and looked at using several different base vehicles for our new model.

‘The Transit came out as the best for us. Customers know and like the Ford brand and spares are plentiful.’ 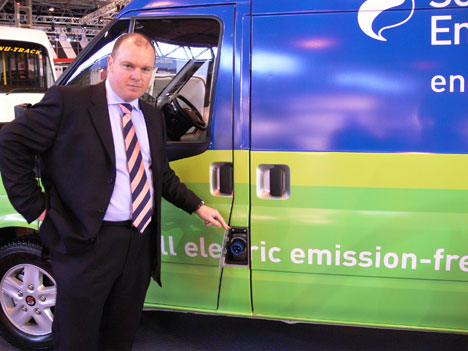 The Edison, which goes on sale in July, will be available as a rear wheel drive 3.5 tonne gvw model and will cost about double the price of an equivalent Transit.

But Mr Kell pointed out that this extra cost could soon be recouped as the van was cheaper to run – about half that of a diesel in fuel costs alone – there was no road fund licence to pay, insurance was cheaper and the van was not subject to the London congestion charge.

The Edison is governed down to 50mph and has a range of 150 miles between top-ups. Payload reduces by 40kg over a diesel model and there is also a loss of space in the load area where the batteries are stored.

Already several big fleets are trialling the Edison, including Sainsbury’s, TNT and Scottish and Southern Energy.

Van drivers are being targeted in a new safety campaign called ‘Driving For Better Business’, which was launched at the show.

The new campaign is being organised by RoadSafe, the partnership of companies in the motor and transport industries and is being backed by Mercedes-Benz and Tesco.

The new initiative features a series of business champions, who will form a network of employers promoting good practice in road safety and spreading the word to other fleets about the benefits.

The campaign starts in September and will run until 2009, initially targeting drivers of sub 3.5-tonne gvw vans.

Statistics show that every day, 150 vehicles are involved in crashes while on work-related journeys. Adrian Walsh, RoadSafe director, said: ‘Given the explosion in demand for van drivers as a result of the boom in internet shopping, it is important that employers focus on driving ability and do not simply assume that being in possession of a driving licence is a guarantee of ability.

We believe our business champions strategy will result in a dramatic increase in the number of companies that adopt effective work-related road safety policies.’

The campaign was launched on the Mercedes-Benz stand, where the firm showed off a new Sprinter Safety Van.

The Sprinter is already one of the safest vans on the roads, with standard equipment including a driver’s airbag, ABS brakes, adaptive ESP traction control, acceleration skid control, brake assist and electronic brakeforce distribution.

In addition, this van is equipped with passenger, window and thorax airbags, rear reversing camera and a host of other devices.

After the show Mercedes will be taking the van on a series of roadshows across the country.

Also on the stand were two representatives of Chelmsford Electrical in Essex, which is already reaping benefits from adopting a safety strategy.

Company secretary Peter Locke said: ‘Since we adopted this policy, there has been a significant drop in the cost of accidents to our firm and great savings in insurance.

Ford has trounced the opposition in terms of van power with the introduction of a blistering 3.2-litre five-cylinder diesel powerplant pumping out 197bhp and 345lb-ft of torque.

The new engine will be available on larger rear wheel drive Transit models and will be the most powerful large panel van on the market.

The new engine was revealed at the show, along with a new 4.6-tonne gross vehicle weight Transit in both van and chassis-cab formats.

On the stand at the show, Ford commercial vehicle director Steve Kimber was joined by professional driver Sabine Scmidtz (pictured) to unveil the new Transit Sportvan, complete with 18in alloy wheels, twin exhaust pipes, leather seats, spoilers and a 130bhp diesel powerplant. Only 500 of these vans will be built, priced at £18,750 ex-VAT. 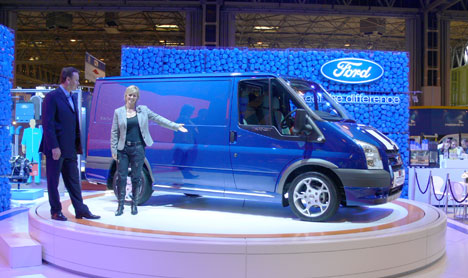 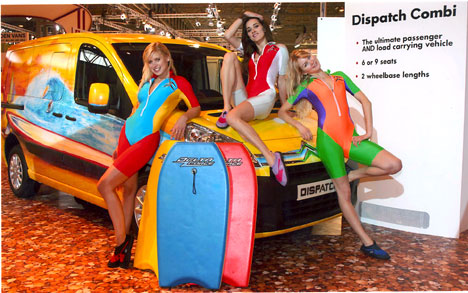 Citroen used their three dancing girls Ready, Willing and Able to show off the new Dispatch, which went on sale last month.

LDV premiered the new Maxus dropside and tipper, which will join the panel van range in September.

They offer payloads of up to 1,330kg and a smooth flat steel deck with no external fittings and welds.

Racking firm Modul-System launched a new security box at the show, aimed to keeping valuables in and thieves out.

The boxes come in a variety of sizes and can hold items such as laptops as well as keys, documents etc.

It is fitted against the bulkhead or the side of the van and is fully lockable. 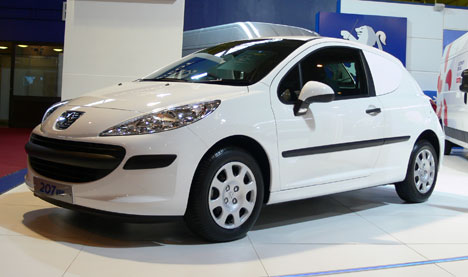 Peugeot used the show for the world premiere of the new 207 van, which goes on sale in the UK in July.

The 207 is the same size as the old 206, offering a load volume of 1.1 cubic metres and a payload of 450kg, but looks and drivability have been sharpened up considerably.

Software specialist cfc solutions launched a new package aimed at commercial vehicle fleets of under 500 vehicles at the show.

Called FleetHorizon, it is based on the software already available for larger fleets but tailored for smaller needs.

FleetHorizon allows operators to manage all driver, vehicle and other asset records as well as fuel and maintenance spending. Reports can be generated and the software will automatically alert the operator when any set parameter falls out of bounds – for example if a driver’s mpg figure is poor.

TOMTOM launched the new Work Compact unit at the show, offering a device with no installation charge.

The unit features a built-in SIM card that enables users to send message and location information between the vehicle and an office-based PC via the internet.

One of the plus points of the system is that it can be moved from van to van. In the office, its Webfleet software enables operators to monitor and guide vehicles.

Telematics firm TrackM8 is aiming to muscle in on small fleet business and was at the show displaying its low-cost system.

Called Swift (simple web interface for tracking), the system costs 47p per day per vehicle and manages up to 100 vehicles. It provides operators with a snapshot view of locations, mileages, maximum speeds and idle time for each vehicle.

Vauxhall unveiled two concept vehicles at the show, which are aimed at drivers who love the road as much as their vans.