New research challenges the perception that the youngest and oldest drivers on business present the highest risk.

Figures released this week by fleet software company CFC Solutions break down the percentage of drivers with driving licence endorsement points by age, based on thousands of users of its Licence Link licence checking software.

And while drivers in the lowest and highest age brackets are high on the scale when it comes to the proportion with points on their licences, drivers aged between 25 and 44 appear to be more likely to accumulate higher numbers of points, and the chance of them being banned from driving could be greater.

The aim of the research, which looked exclusively at company car, van and truck drivers, was to examine the widely held assumption that the youngest and oldest drivers pose the greatest accident risk for fleets, with the findings based on their propensity to commit offences that lead to points being added to their licences.

In the ‘one to four points’ categories, this assumption holds true with the 17-24 and 65+ bands having the
most points.

However, in the high-risk categories of ‘five to eight points’ and ‘nine-plus points’, the 25-34 and 35-44 age groups were more common.

Ages 55 to 64 performed best across most points thresholds, although the 45-54 age group had the lowest number of drivers on nine or more points.

Neville Briggs, managing director at CFC, said: “Perceived wisdom in risk management for many years has been that the youngest and oldest drivers represent the highest risk.

“Younger drivers may lack road experience, and because of this are poorer judges of road situations, while older drivers will tend to have poorer reaction times and a general decline in awareness.

“This means drivers aged below 24 and above 65 may require special attention when it comes to employers ensuring that everything reasonable is done to prevent them from being involved in accidents.”

The research was taken across all Licence Link users, with more than 18% of drivers employed by those organisations carrying points on their licences.

However, the age group with the highest number of drivers in nine or more points was 35 to 44.

Briggs added the new research from CFC and anecdotal evidence suggested that a few middle aged drivers could become a risk management headache for their employers by falling into a cycle of gathering endorsement points and waiting for them to elapse.

He said: “While the actual numbers of these drivers is not high – they form a relatively small percentage of our overall research – they do shatter the myth that the highest-risk drivers are the youngest and oldest on your fleet.

“In fact, these drivers should be at the height of their competence and that is perhaps the issue.

"Some of these middle aged drivers in high risk categories are a definite concern for their managers because they suffer from a high degree of overconfidence.

“For these drivers, some form of remedial action such as training should be considered, before the point is reached where their licence is taken away or a serious accident occurs.” 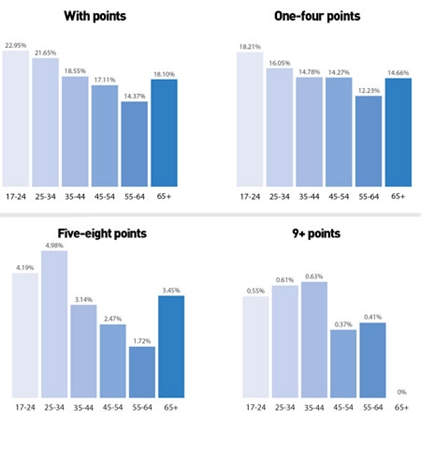