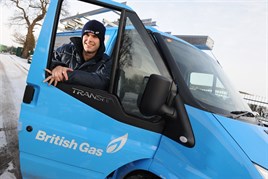 British Gas is to take delivery of 343 Ford Transit medium wheelbase (MWB) vans and 60 all-wheel-drive (AWD) Ford Transits to strengthen its fleet as the UK suffers another harsh winter.

The deliveries will boost the British Gas fleet to well over 1,000 Ford Transits and is part of its vehicle replacement programme that will enable its engineers to make an average of 10,000 service calls every day, providing assistance to 12 million homes and a million businesses across the country.

The Ford Transits will be strategically distributed across Britain to help British Gas achieve even better attendance rates at homes and businesses suffering heating problems during adverse weather conditions.

Colin Marriott, general manager of the British Gas fleet, said: "We have been using Ford Transits for several years now and they are proving very reliable.

"Ford offer well-engineered vans combined with great after-sales service making them the best option for our expanding fleet. The Ford Transit is also very economical, offering the lowest cost of ownership in its class over a five-year, 60,000-mile life cycle."

Kevin Griffin, director of fleet operations, Ford of Britain, said: "It's reassuring to know that British Gas which provides such a lifeline to its customers - particularly during extremely bad weather - is putting its faith in Britain's most popular van, the Ford Transit.

"It is a testament to the popularity and reliability of the Ford Transit that British Gas now have over 1,000 on their fleet."