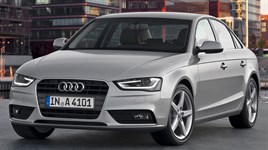 The Audi A4 range will get a new look for 2012, as well as new technology and reduced running costs.

Standard on all variants is the new driver information system with break recommendation – it detects and draws the driver’s attention to deviations from typical driving behavior on the basis of steering motions and other parameters.

Options include adaptive cruise control, which keeps the A4 at a constant distance from the preceding vehicle at speeds between 19 and 124 mph.

If the threat of a rear-end collision becomes imminent at speeds below 18 mph, the system will apply the brakes at full strength.

Also optional is Audi active lane assist, which helps the driver stay in lane. A camera detects the lane markings and the system makes slight corrections to the steering if necessary. Audi side assist monitors the space behind the A4 by radar and detects any vehicles in the blind spot.

UK specification and prices will be confirmed in the next few weeks, but are expected to be similar to the current A4 range.