Roof comes off convertible values as market opens up 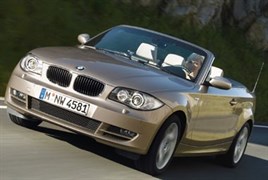 Warmer and sunnier weather in the coming months will see residual values for convertibles rise significantly, according to data from Glass’s, the UK’s vehicle valuations experts.

On an annual basis convertibles typically retain more of their original value than other segments. General market models, such as the Peugeot 207CC or Mazda MX-5, and premium models, such as the BMW 3-Series or Audi A4, hold onto an average of 42% and 45% respectively after three years.

In comparison, compact MPVs, such as the Renault Scenic, and upper medium cars, such as the Ford Mondeo, retain an average of 33% and 32% of their value after three years, respectively.

As the British weather improves, buyers will once again be tempted by the open-top motoring afforded by a convertible and trade values are set to experience double-digit increases from the start of the year.

The effect was even greater in the premium convertible market, where the average auction price of £12,650 in January 2010 rose to £15,525 by April 2010, representing an increase of 23% over the three months.

Savvy buyers have begun to arrive on the forecourts already, and they will benefit from lower prices just before the seasonal uplift becomes apparent. From March we would expect to see the higher trade prices being reflected into higher forecourt prices as dealers attempt to protect, or increase, their trading margins.

Adrian Rushmore, managing editor at Glass’s, said: “The roof is set to come off values of convertibles in the coming months and this will apply to both soft and hard-tops. Whilst manufacturers tend to try to promote the latter as cars for all-year round, general consensus is that the supply and demand patterns on hard-top models are virtually identical to those for soft-tops.”

The only barrier to a boost in values is problems with supply or lack of demand from customers, but the signs are very positive that market demand will be as strong as ever and convertibles will present dealers with plenty of profit opportunities in the coming months.

Dealers should bear in mind that trade prices are set to go into a slow and steady decline after April. The single biggest monthly drop is most likely to take place between August and September, which will amount to around 10%, Dealers should be mindful of this when trying to shift the remainder of stock later in the year.