Vauxhall has released a sketch of its forthcoming Astra Cabriolet which will ditch the retractable metal roof in favour of a fabric skin.

The convertible is expected to go on sale within 18 months as part of an impressive new wave of Vauxhall models. The company is putting much greater emphasis on style and design with a noticeable uplift in the quality of the interiors, according to design sources.

This focus is a continuation of the trend which started with the Insignia in 2009. 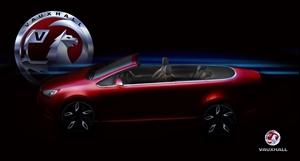 The sketch, released by Vauxhall’s British design boss Mark Adams, suggests a four-seat car with sharp edges and a steeply raked windscreen. Weight savings and improved visual appeal are thought to be behind the decision to switch to a fabric hood. Combined with a longer rear overhang, it will also mean a larger boot.

The Astra cabrio will be heavily based on the Astra GTC three-door but is longer to improve space for rear passengers. Expect prices to start somewhere north of £20,000.

“The GTC is a high-profile addition to the Astra range and one that’s sure to appeal to anyone who loves cars and driving,” said Duncan Aldred, Vauxhall’s managing director. “Better still, its chassis has been fine-tuned by Vauxhall Engineering Centre in the UK, reflecting the importance of our Millbrook-based operation, and also the fact that the UK will be the dominant market for GTC when it arrives in showrooms later this year.”