Prepare for snow in the next eight weeks, says ATS Euromaster 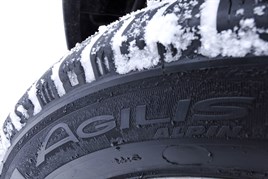 Snow is expected in the UK as early as next month, prompting ATS Euromaster to remind businesses to prepare for difficult travelling conditions.

Meteorologist James Madden, of Exacta Weather, predicts October will see below average temperatures and snow in places, with heavier and more widespread snow storms in November and worse to come in December and January.

Madden warns: “No region is likely to escape the harsh winter, not even the South. However, we expect Scotland, North East England, Northern England and Northern Ireland will be the worst hit. I’d be very surprised if we don’t see weather records being broken.”

He added: “A winter of this magnitude poses huge implications for the infrastructure of the UK transportation system.”

In anticipation of high demand from businesses, ATS Euromaster has doubled its investment in cold weather tyres this year to £6 million, with a choice of premium, mid-range and low-cost brands on offer to suit all fleets.

Peter Fairlie, ATS Euromaster’s group sales director, says: “The last few winters have really taken their toll on businesses in the UK, but there’s a real risk the worst is yet to come.

“If drivers can’t get their vehicles out on the road, staff will struggle to get to work, goods won’t be delivered and services will be delayed. The knock-on effect means invoicing and cash-flow are disrupted. We have seen this happen in the UK for three years now – I suppose we should be getting used to it!

“The key is to think ahead and plan early. There’s no point waiting until your fleet is stuck to consider cold weather tyres. Companies have been changing tyres on the continent for decades, but it’s now become a business-critical issue for the UK too.”