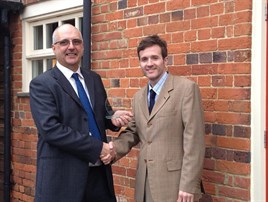 It is the second year in succession that Ogilvie Fleet has won a Fleeteye CSI award having topped the category in 2011 which recognised service to fleet operators with 25 to 250 vehicles during 2010.

The 2012 award was based on results obtained throughout 2011 from Experteye’s market-leading post-sale customer satisfaction survey which is drawn from a subscriber base of top leasing companies in the UK.

Fleet operators are surveyed independently by Experteye, which asks an extensive range of questions on a monthly basis. The annual CSI award goes to the company that has achieved the highest combined results across the entire year.

The 2012 award adds to the award won last year by Ogilvie Fleet, which was based on customer service performance in 2010 - the first year the organisation had decided to take part in the survey.

“We’d like to congratulate Ogilvie Fleet,” said Rick Yarrow, managing director of Experteye, “as the company has shown consistently strong levels of service throughout the year.

“The Fleeteye CSI remains the principal measure of customer satisfaction in the fleet sector, and continues to improve with increasingly flexible back-end reporting, the ability to tailor question sets so that they are meaningful to fleet operators and there are also benefits to fleet managers who can access essential industry benchmarking data once the survey has been completed.”

Nick Hardy, sales and marketing director of Ogilvie Fleet, which now has almost 11,000 vehicles on its books, said: “It is hugely gratifying to win the award because it is based on impartial data which independently benchmarks us against competitors, making this an incredible achievement.”