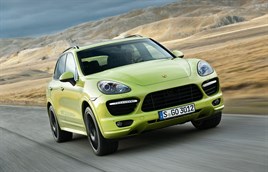 Porsche will celebrate the world premiere of the new Cayenne GTS and present the new generation of the Boxster for the first time in Asia during Auto China in Beijing, which holds its Press Day on April 23.

The GTS offers a more powerful 420 hp engine, increased dynamic power development and a tauter chassis with 24mm lower ride height and Porsche Active Suspension Management (PASM) as standard. The Cayenne GTS goes on sale in the UK in July, priced from £67,147.

China represents the fastest growing export market for Porsche and is the second largest after the USA and ahead of the domestic German market. The sports car manufacturer sold more than 24,000 vehicles in China last year, an increase of 65 per cent compared with 2010 and a new record for the company. Bernhard Maier, member of the executive board sales and marketing of Porsche AG, said: “Porsche is therefore the market leader for sports cars in China. From the establishment of our subsidiary in 2008 up to today, we have sold 8,831 sports cars of the 911, Boxster and Cayman models in China. Last year we attained a segment share of 46 per cent.”

The most popular Porsche model in China in 2011 was again the Cayenne with 13,283 units sold. For the second time in succession, more SUVs were supplied to customers in the Middle Kingdom than in any other country in the world. China is also now the world’s largest market for the Panamera, and the second largest single market for the mid-engined Boxster and Cayman sports cars.