FleetLine adds Ampera to its books 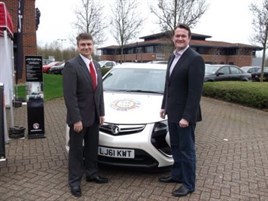 FleetLine, a division of LeasePlan aimed at businesses operating between one and 100 vehicles, has announced that as of May, 2012, it will be one of the first leasing providers in the UK to offer customers the electric Vauxhall Ampera.

The agreement follows last year’s announcement that FleetLine’s parent company LeasePlan had entered into a Europe-wide agreement with Vauxhall to purchase over 650 Amperas this year. FleetLine will initially make 20 Amperas available to customers.

Simon Carr, brand director at FleetLine, said: "We are delighted to be able to offer our customers the Ampera.

“The Ampera has a significant range of more than three hundred miles, making it more of an attractive, everyday fleet car.”

Electricity drives the Ampera’s wheels at all times and speeds. For trips up to 50 miles, power is supplied by the electricity stored in the 16-kWh, lithium-ion battery.

When the battery’s energy is depleted to a minimum state of charge, a petrol/E85-fueled engine generator provides electricity to power the electric drive unit while simultaneously sustaining the charge of the battery.

This mode of operation extends the range for a further 310 miles, until the battery can be charged by plugging into a standard household 240-volt outlet.

Richard Roberts, contract hire and leasing manager at Vauxhall, said: “The inclusion of the Ampera as part of the range of vehicles offered by FleetLine to customers is a further endorsement of the vehicle and it’s technology and is further proof that as an electric vehicle, the Ampera is a perfect choice to be used as part of a fleet of company vehicles.”