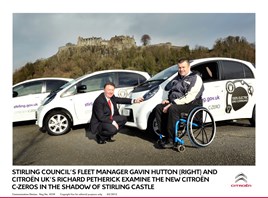 Three Citroën C-Zero all-electric city cars have been added to Stirling Council’s fleet as part of its drive to reduce carbon emissions and to deliver financial and energy savings.

The C-Zeros will be used by the council’s environmental services team, where day-to-day performance will be monitored, managed and analysed before a decision is made about the future expansion of the electric vehicle fleet.

“The Citroën electric cars tie-in with the Scottish Government's legislation on climate change and provide added benefits with zero emissions, while also saving the council money as they are cheaper to run than a normal petrol car - a definite win, win situation.”

The new vehicles were bought through the Stirling Community Planning Partnership (CPP), which received funding from Transport Scotland under the Scottish Government's Electric Vehicle Procurement Scheme. Thanks to the Government grant the council paid the equivalent price to a conventional small car.

Citroën’s C-Zero is driven by a 49kW electric motor powered by a 16kW/h lithium-ion battery pack. With its regenerative braking system recovering energy during deceleration, the C-Zero can travel up to 93 miles on a single charge.

Cllr Steven Paterson, chairman of the CPP, said: “We hope that the council and other partners supported through the scheme will provide a platform for electric vehicles to demonstrate their functionality and potential for emissions reduction.”

At its Springkerse depot, Stirling Council has installed a special terminal that provides an 80% recharge in just 30 minutes to power the cars.