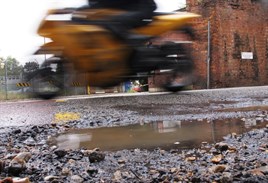 The condition of council roads failed to improve between 2008 and 2011, according to new figures out today from the Department for Transport.

The councils with the highest percentage of minor roads requiring maintenance are Newham (20%), North Lincolnshire (18%), and Haringey (18%).

Of the 89 councils that provided data, 38% reported that their minor roads deteriorated in 2010/11, 38% of councils remained the same, and 24% reported improvements.

In the same period, 40% of councils reported deterioration in main road conditions, 38% reported that their roads had remained the same and 21% reported improved conditions.

IAM director of policy and research Neil Greig said: “Under the previous government local authorities had targets to improve the condition of their roads. While the old system of road maintenance targets wasn’t perfect, the effect of the coalition scrapping these targets is evident in certain areas.

“Extra central government money following recent bad winters and the public outcry over the state of the roads has helped to stem the tide, but only when we have a commitment to long term funding can councils really start to address the huge backlog of repairs.

“Poor road conditions damage vehicles, and are especially dangerous to cyclists and motorcyclists who can be easily thrown off course by potholes. They also put all road users at risk, as drivers take evasive action to avoid hitting them.”