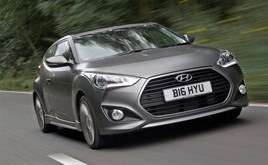 Hyundai has announced that a turbocharged version of the Veloster will be in showrooms from September 24 priced at £21,995.

The Veloster Turbo SE is the first vehicle to feature Hyundai’s 1.6 litre T-GDI engine with a high-compression, twin-scroll turbocharger.

In a bid to enhance driver enjoyment power output has been boosted while low end torque has been increased.

It develops 184bhp and 195lb ft of torque and is mated to a standard six-speed manual gearbox. It reaches a top speed of 133mph and hits 62mph in 8.4 seconds.

President and CEO of Hyundai Motor UK Tony Whitehorn said: "The Veloster has quickly established itself as a fun car and a unique proposition. Now the Veloster Turbo SE brings an extra helping of dynamism, excitement and emotional appeal to our refreshed model line-up.

"Its overall package is genuinely strong against other competitors such as the VW Scirocco 1.4TSI and the Astra GTC 1.6i 16v VVT Turbo."

He added: “We believe the performance enhancements will further increase the Veloster’s appeal for drivers who want the perfect combination of stand-out design, an engaging drive, coupled with the efficiency and practically of a traditional hatchback”.

The Turbo SE comes with visual enhancements to give it a more athletic and purposeful look, including revised front and rear bumpers, radiator grill and front fog lights as well as twin exhausts and a diffuser. It is fitted with a longer and wider rear spoiler with integrated LED brake lights and a red 'turbo' nameplate on the bootlid.

18-inch alloys are complemented by a moulded side sill giving it a low and sporty stance.

The Turbo SE will be the first Hyundai available with a matt grey finish priced at £525, alongside white crystal and phantom black finishes, the latter costing £445.

Inside there are re-designed leather seats with the'turbo' nomenclature embossed on the driver’s and passenger’s seats. A seven-inch sat-nav system comes as standard along with Hyundai’s media centre and reverse parking camera.

Hyundai has not confirmed whether the Veloster will be offered with a diesel engine.