BMW to launch 320i EfficientDynamics 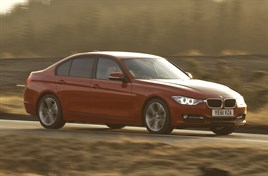 BMW will launch its first petrol low-CO2 champion in November with the introduction of the 320i EfficientDynamics saloon.

The 1.6-litre turbo-charged model produces 170bhp, but has CO2 emissions of 124g/km, putting it in the same 15% BIK tax bracket as the current 109g/km 320d EfficientDynamics saloon with the latter carrying the 3% BIK supplement on diesel cars.

But the 320i EfficientDynamics is priced £2,250 lower (£25,730 OTR) than the 320d EfficientDynamics, meaning the BIK tax paid on the petrol car, as well as employers' National Insurance contributions, will be lower.

The 320i uses the same stop-start technology, energy recuperation, lower suspension, smaller wheels with low-rolling resistance tyres and improved aerodynamics to help achieve its impressively low CO2 emissions along with fuel consumption of 53.3mpg on the combined cycle.

According to our running costs calculator, based on current pump prices, the 320d ED will retain a small pence-per-mile running costs advantage over four years/80,000 miles.

The 320i ED will be liable for Vehicle Excise Duty at a higher rate, too, at £100 from the second year onwards, compared with £20 for the diesel model.

However, the 320i might be suitable for lower mileage drivers, as at 10,000 miles per annum over four years the petrol model works out less expensive.

BMW head of corporate sales Steve Chater told Fleet News: "Having the 320i ED is really important for us because if you look at the differential in pump price between petrol and diesel, petrol engines can sometimes be a cost-effective alternative.

"It's also one of the reasons we have also introduced the new 114i to the 1 Series range. While there isn't a great deal of evidence to show a switch from diesel to petrol in the corporate sector, it's an area to keep an eye on, and we need to offer customers the choice."