One in three drivers suffers pothole damage to their vehicle 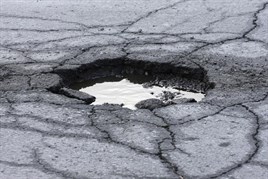 A third of drivers have damaged their vehicle by hitting a pothole in the last two years, according to the AA.

A new AA/Populus survey of 22,827 AA members found that damaged road surfaces took the greatest toll on drivers in the north of the UK with Scots (44%) taking the biggest pothole hit by some margin.

More than a third of drivers in northern England, Yorkshire and Humberside, and South-east have had their car damaged, while those in Eastern England and Northern Ireland (29%) have suffered least.

The ‘pothole plague’ is getting worse after the recent cold snap which followed a wet 2012.

Potholes form as water freezes and expands in cracks in the road surface. Passing traffic opens up the damaged road surface and rain washes out loose material, deepening it further.


The results show that tyres and wheels bear the brunt of the impact with 13% of respondents reporting a damaged tyre and 6% sustaining damage to both tyre and wheel. An unlucky one-in-ten has had their steering knocked out of alignment as well as damage to the wheel.

AA Insurance reports the number of pothole-related claims more than doubled in January, compared with the same month last year.

Andy Smith, AA patrol of the year, said: “It’s no surprise that drivers in the north have taken the biggest pothole hit, but AA patrols report that as soon as you get off the main road in many rural areas, it’s like being on an Alpine mountain pass – you’re often in first gear traversing huge craters.

“If you see one up ahead, slow down and try to avoid swerving round it as you risk having a more serious accident.

“Regularly check your tyre pressures and look for any bulges, nicks or unusual tyre wear, which could spell pothole trouble. If in any doubt, get them checked at a garage or tyre specialist.”

“The fact that one third of our members have had their car damaged by potholes is a damning indictment of the state of our roads – they’re a national embarrassment.

“More broadly it doesn’t reflect well on the standing of our nation in the eyes of tourists and indeed foreign investors.

“A decent road infrastructure must be a minimum requirement for a progressive 21st century country.”

The AA is encouraging road users to report potholes to local authorities to allow them to repair them.

Usually the repair cost won’t justify an insurance claim. However, you might be able to claim for the cost of any repairs from the highway authority if they were aware of the defect. Last year, the average compensation claim paid was £583.

Further information on making a claim for pothole damage is available on the AA website.