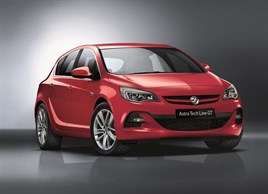 Vauxhall is hoping to lure user choosers to the Astra with a range restructure, lower pricing and new models with added fleet appeal.

The changes echo the new strategy that Vauxhall has adopted with the latest Insignia.

Like the Insignia, ES and Exclusiv have been replaced by a new entry-level Design model.

Design has the same spec as the current Exclusiv with the addition of alloy wheels, which will boost residual values by an estimated £100 over three years/60,000 miles.

Prices have been rolled back by approximately £2,000 on the new Design model versus the current Exclusiv, saving company car drivers £400 in Benefit-in-Kind tax over three years.

Unlike the new Insignia, CO2 emissions have not reduced as engines remain the same. The tax savings come simply from the reduced price.

Companies will save an estimated £2,500 in wholelife costs against the current Exclusiv and £1,000 against the Ford Focus Zetec.

Tech Line has been given a sporty edge with the introduction of a GT model, which is approximately £2,000 cheaper than the current SRi, saving company car drivers £400 in BIK over three years, 60,000 miles.

There have been significant styling enhancements with a bi-turbo front end and styling pack.

18-inch alloy wheels are available although they are restricted to 17-inch on the 99g/km model to keep CO2 emissions low.

The changes bring an estimated £500 RV uplift over the current Tech Line on a three-year, 60,000 mile cycle.

Vauxhall suggests it will be a key rival to the Focus Zetec S, saving companies approximately £1,000 more in wholelife costs.

"User chooser drivers in this segment want to have something a bit different and this addresses that point and gives them the rational reasons for making that choice by having the lower P11D price."