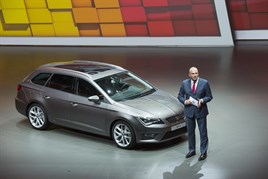 Seat have announced the ST estate variant of its popular Leon at the Frankfurt Motor Show, starting at £16,675 in the UK.

Going on sale from October 1, with deliveries due in early 2014, the new estate model features a 587-litre boot, and roof rails.

There are now two versions of the 1.6 diesel TDI – a standard 105 PS variant, and the just-announced 110 PS Ecomotive. Following those are the 2.0 TDI units, with either 150 PS or 184 PS. A range of transmissions are available, from a five- or six-speed manual to a six- or seven-speed DSG automatic.