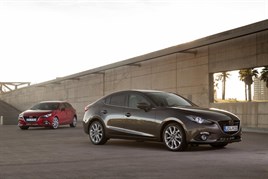 Mazda have announced tax bandings for the new Mazda3.

The model, which will be available in hatchback and fastback (saloon) body styles, will be the third car in the Mazda range, following the Mazda CX-5 and new Mazda6, to feature the manufacturer’s SKYACTIV technology.