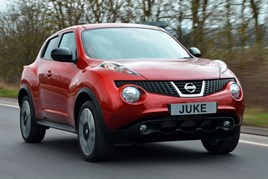 Nissan set new records for both car and van sales in the UK in 2013, increasing on the previous best by 11%.

The Qashqai continued as the UK's best-selling Nissan with 50,211 registrations, a 9.9% increase on 2012 and the first time the Qashqai has topped the 50,000 mark. The figures consolidated the Qashqai’s position as the UK’s sixth best-selling car.

The Leaf EV has a healthier yest in 2013 with almost three times as many registered last year at 1,812. European production of a revised Lleaf started at Nissan’s Sunderland production facility in April, with a range of equipment grades and pricing structures.

Nissan’s registrations boost  was set against the backdrop of a record year at Nissan's Sunderland manufacturing facility, which broke the 500,000 unit production barrier for the second year in a row, building 501,756 vehicles.

Jim Wright, Managing Director at Nissan GB said: "These figures prove that Nissan is continuing to reap the rewards of hard work and intelligent planning. For the Qashqai to break the 50,000 sales mark in its sixth year of production is testament to its remarkable design and value.

"I’m also immensely proud of our other British success stories, namely the Juke, new Note and Leaf. The Juke’s performance proves that British buyers value bold and innovative design, while the Note and Leaf are welcome additions to the Sunderland stable. To break the 500,000 production barrier for a second year is incredible, especially as the plant has been busy integrating new facilities for new Note and Leaf.

"With the new Qashqai rolling off the lines, I’m sure that 2014 will be another year to remember."