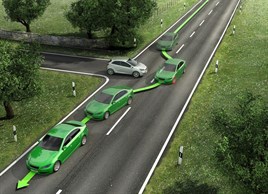 The anti-skid system ESP, which is mandatory for all newly registered passenger cars and light commercial vehicles from tomorrow (November 1, 2014), has prevented 190,000 accidents and saved more than 6,000 lives across Europe since its launch in 1995.

The regulation will take effect for all other vehicles one year later and according to independent studies, up to 80% of skidding accidents on the road could be prevented if all vehicles were equipped with the anti-skid system.

In 2011, ESP prevented more than 33,000 accidents involving injury and saved more than 1,000 lives in the EU member states (of which there were 25 at the time), even though ESP was only installed in an estimated 40% of vehicles.

Bosch has manufactured 100 million ESP systems since series production began in 1995. While 84% of all new vehicles in Europe were equipped with the anti-skid system in 2014, the figure for all new vehicles worldwide was only 59%.

“ESP saves lives,” says Gerhard Steiger, president of the Bosch Chassis Systems Control division. “It is an unparalleled success story that we hope to replicate outside Europe as well.”

Since September 2011, ESP has been mandated for all vehicles in the United States and Canada with a gross vehicle weight up to 4.5 metric tons. Australia and Israel have also made ESP mandatory. Similar regulations will take effect in Japan, Korea, Russia, and Turkey in the years ahead.