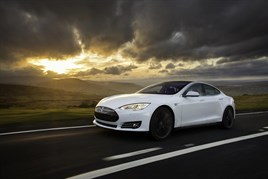 Tesla has opened a Birmingham store and service centre, a five-minute drive from A45 and A38.

By the end of 2014, customers will be able to visit Tesla stores and service centres across the country.

Tesla is currently recruiting for upcoming sales and service facilities in Manchester, Bristol, Newcastle and Edinburgh.

The company will continue to hold test-drive events around the UK.

“We are working on additional London locations with new sites to be announced shortly,” said Georg Ell, Tesla’s country director for the UK and Ireland. “Our plan for routes around the UK is also under way and we now have four locations outside of the capital.”

As well as Tesla’s existing site in Birmingham, the company has added Reading, Bristol and Edinburgh to the network.

Within the next six months, Model S drivers will be able to drive the length of the UK relying only on Superchargers.