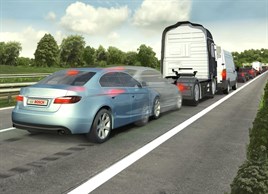 Almost one in three fleets is failing to educate or train their drivers in key areas of road safety.

Brake and Licence Bureau questioned 228 fleets about driver education and the topics they cover, including mobile phone use and speeding. Around half (49%) operate fewer than 100 vehicles.

It found that 29% do not provide education or awareness on any of the key topics it listed, while the most common areas covered were mobile phones and other distractions (63%), hazard awareness (58%) and speed awareness (57%). 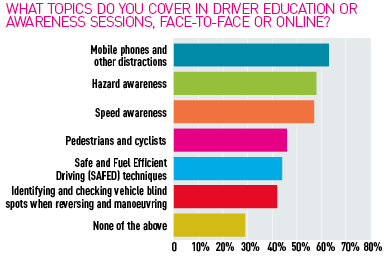 However, the majority don’t instruct drivers to take some of the most important steps to protect vulnerable road users.

Two-thirds (68%) don’t tell drivers to slow down to 20mph around schools, homes and shops, and six in 10 (61%) don’t instruct drivers to look twice for bikes at junctions.

Although two-thirds (67%) instruct drivers not to use any kind of mobile phone at the wheel, only one in four (26%) tell drivers to switch their phones off.

Almost one in four (23%) do not tell drivers to take any of the simple, life-saving measures listed.

Ellie Pearson, senior professional engagement officer at Brake, said: “It’s crucial that all fleet operators are providing regular and ongoing education and awareness training for their drivers, and it’s worrying to see that three in 10 operators still fail to do this.
“It’s very positive to see operators providing training on key issues such as distraction and hazard awareness, but obviously we’d like to see a holistic approach to education, covering all areas of risk.”

It is estimated that up to 95% of crashes are down to driver error. It’s therefore vital that drivers understand the importance of safety and the simple steps they are expected to take to protect themselves and others.

A key risk for at-work drivers is mobile phone use. Brake studies show at-work drivers are much more likely to use mobiles at the wheel than those who do not drive for work.
Research has found that drivers speaking on phones are four times more likely to be in a crash that causes injury, whether on a hands-free or hand-held phone.

Mobile phones are not the only distraction risk. Eating and drinking, smoking and adjusting music players or sat-navs can also cause potentially fatal distractions. Distraction is estimated to account for almost one in four (22%) crashes.

Pearson told Fleet News she would like to see fleet operators promoting best practice safety advice through their education and awareness raising campaigns.

“For instance, while it’s encouraging to see operators educating their drivers on the dangers of using any type of phone at the wheel, we’d like to see them reinforcing that message by advising drivers to turn off their phone and keep it out of reach whilst driving,” she said.

A huge proportion of organisations are not taking basic steps to plan realistic schedules and efficient routes – essential principles in deterring speeding and protecting vulnerable road users. The survey suggests that just over half (56%) plan realistic schedules to remove the pressure on drivers to speed, and even fewer (46%) tell drivers that they won’t be penalised for running over time.

Only one in 10 (11%) plan routes to avoid areas where there are likely to be lots of people on foot or bike, and one in five (20%) don't take any of these advised actions at all.

Brake said that where driving cannot be avoided, planning journeys to reduce mileage and use the safest routes enables fleets to reduce their risk.

This can mean significant savings for fleets as fuel can account for up to 19% of a fleet vehicle’s total cost of ownership.

Previous Brake surveys have found that employees who drive for work are more likely to report speeding and risky speed-related manoeuvres such as overtaking, than staff who do not drive for work.

One measure with great potential for preventing speeding and reducing casualties is intelligent speed adaptation (ISA).

ISA uses GPS combined with a digital map of speed limits to keep vehicles to the posted limit on each road, either by advising the driver of the limit through a signal (advisory ISA), or automatically decreasing acceleration if a driver exceeds the limit, with or without the driver being able to override this (voluntary or mandatory ISA).
Controlled trials of ISA in the UK have indicated voluntary ISA could reduce road deaths by 21%, and mandatory ISA could reduce deaths by 46%. More than half (54%) of respondents said they were aware of ISA and know at least a little about the benefits, but only 5% have actually tried it, showing the huge scope for promoting the use of ISA across the fleet industry.

Pearson concluded: “It’s reassuring to see that more than half of fleets are aware of ISA technology, although given that the take-up rate for using the technology is so low (5%), more needs to be done to promote and develop ISA adoption throughout the industry.” 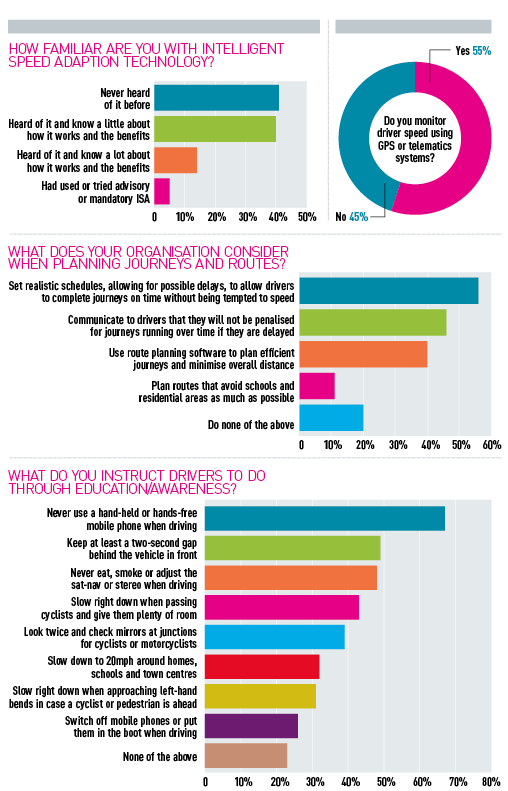