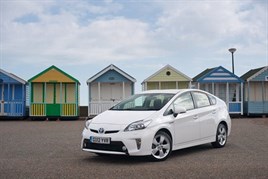 Toyota has issued a recall that affects 30,790 UK-registered Prius vehicles manufactured between March 2009 and February 2014.

Toyota has identified through its quality reporting programme that there may be an issue concerning the software used to control the boost converter in the Intelligent Power Module, part of the hybrid system’s inverter assembly. The boost converter is required when driving with a high system load, for example when accelerating hard from standstill.

The software setting could lead to higher thermal stress occurring in certain insulated-gate bipolar transistors in the boost converter which may lead to them deforming or being damaged.

Should this happen, warning lights may be illuminated and the car is likely to switch to “failsafe” operation – it can still be driven, but with reduced power. In limited cases the hybrid system may shut down, causing the vehicle to stop. The driver will not experience any change in the vehicle’s behaviour or performance prior to the problem occurring.

The company says the issue will not occur in other Toyota hybrid vehicles, as these use different transistor structures and control logic.

The software replacement will take about 40 minutes to complete and the work will be carried out free of charge.