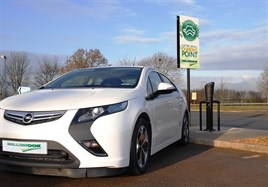 The Low Carbon Vehicle Partnership (LowCVP)  has announced its programme, designed to complement £500m of spending plans by the Government’s Office for Low Emission Vehicles (OLEV).

Partly funded by the Department for Transport, the LowCVP works with the support of industry, government representatives, road users, environmental groups and others to help facilitate the shift to low carbon road transport and fuels, and encourage UK growth through related investment, innovation and jobs.

At its tenth anniversary in January 2013, the LowCVP announced the intention of ‘moving beyond the tailpipe’. All future projects will be developed with this wider life-cycle perspective of carbon embedded.

A central theme this year will focus on the analysis of wider benefits for UK plc arising from the development of a vibrant UK low carbon automotive industry and the influence of policy intervention in that development. The output from this work will be a main component of the LowCVP’s Annual Conference.

There is widely perceived to be a need for coordination between national policy objectives and actions at the local level where many of the most important levers of influence exist. The LowCVP will be evaluating how national policy to promote low carbon vehicles can most effectively be translated and supported into the local and regional policy level.

Though cars through their sheer numbers produce most of the CO2 emissions from road transport, vans are increasingly significant contributors. An element of the LowCVP’s work programme will focus on improving the provision of information available to van buyers, enabling them to make more relevant comparisons between types of low carbon van.

There will also be key projects in priority areas of fuels, commercial vehicles, buses and innovation.

The energy used by transport and the carbon in its production is an important, and challenging, area for policy. This year, the LowCVP will examine the fuels infrastructure necessary to support the decarbonisation of road transport by 2050 (in accordance with Carbon Plans underlying the UK’s Climate Change Act). The Partnership will also continue to build on its work on the UK policies within transport which will be necessary to meet the EU’s ‘20-20-20’ targets and the Renewable Energy Directive (RED). (Note: This activity will complement Government action on low carbon fuels. Additional spending commitments will extend the EV rapid charge network and improve gas refuelling infrastructure.)

The successful Green Bus Fund, based on guidelines developed by the LowCVP, has resulted in the UK being amongst world leaders in the development and adoption of low carbon buses. The Partnership aims to follow this success and further develop policy mechanisms to encourage the adoption of low emission buses. (Note: OLEV has just announced a commitment to spend at least £30m from 2015 on low emission buses.)

In addition, the LowCVP and its partners will be developing an accreditation scheme for low carbon HGV technologies based on real-world track testing. This work will provide an evidence base and methodology on which future policies can be founded.

The LowCVP works to hasten innovation in the area of low carbon vehicles. In 2014-15, the Partnership will focus on the production of a best practice guide which will concentrate on how to support and secure investment in the low carbon automotive sector at a regional level incorporating the role of universities and Local Enterprise Partnerships.

There will also be a new project to identify the emissions saving potential and role of L-category road vehicles such as quadricycles, electric motorbikes and electric bicycles.

The LowCVP recently assessed the air quality implications arising from the adoption of large numbers of low carbon buses. With concerns over air quality on the rise in the UK and elsewhere, the Partnership proposes to develop an air quality theme in its work over the next year, seeking to ensure that air quality benefits also arise from the process of transport decarbonisation.

The LowCVP Chairman, Darran Messem said: “Exhaust carbon emissions from new cars and other road vehicles have been cut at unprecedented rates over the last decade, helping reduce climate impact and save drivers and businesses money through greater fuel efficiency.

“These environmental improvements have been achieved while the UK motor industry has gone from strength-to-strength, delivering exciting new products, new technologies, economic growth and jobs.”