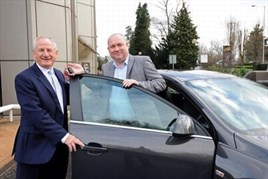 BT is adding 242 Vauxhalls to its fleet this year in addition to the 692 vehicles Vauxhall supplied in 2013.

The deal largely consists of the new Insignia, powered by the 2.0CDTi 140hp engine that uses Vauxhall's award-winning Ecoflex technology.

The Insignias, which have been specified in Design trim, achieve fuel consumption of 76.3mpg on the official combined cycle and have CO2 emissions of 98g/km.

Alongside the Insignias, the rest of the fleet will be made up of a mixture of Corsas powered by the 1.3CDTi 95hp Ecoflex engine, the Astra hatchback and the British-built Astra Sports Tourer.

"We are dependent on our vehicles in order to offer the best possible service to our customers, so having a reliable fleet is vital," said Duncan Webb (pictured, right, with Vauxhall fleet sales customer relationship director Maurice Howkins), commercial director at BT.

"Having ordered 560 vehicles from Vauxhall between 2011 and 2012, we are familiar with the reliability and impressive build-quality."

James Taylor, fleet director at Vauxhall, said: "It is great to be selected again for a fleet order of this volume and importance. The addition of the new 98g/km Insignia will lower BT's overall fleet CO2 average as well as directly benefitting the finances of the end-user."