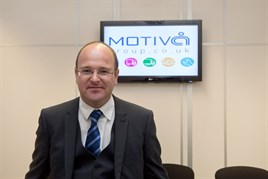 Motiva Group have reported their best first-quarter results since the start of the recession five years ago.

The company, based in Stoke-on-Trent, says trade for contract hire in the year so far is comfortably over and above even their most optimistic estimates.

And sales director Peter Wright believes the ‘startling’ increase in demand for company cars is a clear sign that the economy has turned a corner.

He said: “We’ve seen exceptional trade for business contract hire since the turn of the year and that’s a positive indication that the country is on the up again.

“There has been a massive turnaround and you can tell there is a real buzz in business at the moment, both here in Stoke-on-Trent and nationwide.

“More and more companies are now renewing or expanding their fleets and that’s good news for us of course. But it also shows they’re confident about the future, which is great news for everybody.”

Wright said Motiva had taken more than 300 new customer contract hire orders in the first three months of the year and is predicting the trend will continue.

“We’ve had an exceptionally fast start to 2014 – the best since the economy took a downturn five years ago,” he added.

“We thought we were doing well at around the same time 12 months ago, but our order-take figures so far this year have blown that out of the water.

“We’re massively exceeding our upper estimates for cars, vans and trucks – with varying fleet sizes for all different market sectors.”

Quicker conversation rates are a secondary sign of how the market has changed in recent months, according to Wright.

“The time taken by customers to go from quotation to the decision-making stage has become less and less in recent months,” he said.

“It went from three to four weeks, when companies were understandably being much more cautious, to 10 days or so. Now it’s around two or three days on average, which is a sure sign things are happening out there.

“We can tell our customers are doing well and that means we are too.”