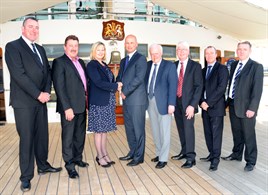 The landmark event, marked by a contract signing ‘ceremony’ held aboard the iconic Royal Yacht Britannia moored in Edinburgh, has been heralded by the network’s Managing Director Ian Pugh as “a hugely significant event for Fix Auto UK.”

The new franchisees will complement Fix Auto Glasgow North, meaning that 80 per cent of Scotland’s motorists are now within easy access of a Fix Auto bodyshop.

Pugh said: “Fix Auto UK has never signed five franchisees in a single day, and in doing so we have significantly strengthened our proposition and UK coverage. Today is an extremely important day for our network and we could not let it pass without pushing the boat out, so to speak.

“We wanted to mark the occasion by bringing all six Scotland-based bodyshops together at an iconic Scottish venue with direct links to the rest of the nation. The Royal Yacht Britannia, the scene for countless historic meetings, fitted the bill perfectly.  It was great to hear first-hand from all the new franchisees how they could see the benefits of becoming part of a Scotland solution for insurers and their policyholders.”

Manager of Fix Auto Glasgow North, Michael McLaren, who has been an instrumental driving force behind recruiting the new businesses to join the network said: “It was important that we developed our coverage in Scotland, and our team is now delighted to be joined by five new Fix Auto franchisees.  I look forward to engaging in the ‘working together’ ethos, and to developing a cohesive network to offer an unrivalled solution for our region.”