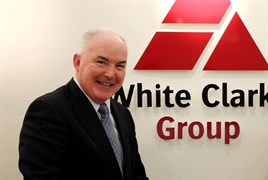 Dara Clarke, the CEO of White Clarke Group, has died after being struck by lightning whilst hosting a charity golf match.

The company said: “It is with great sadness that White Clarke Group announce the death of Dara Clarke on Sunday 25 May 2014 after being struck by lightning last Thursday, 22 May.”

Bringing with him a larger-than-life personality, Clarke’s professionalism and expertise wrought a massive influence in the European asset finance industry.

His career started when he became Group Internal Auditor at United Dominion Trust in Ireland in 1973. In 1979 he was appointed Finance Director for 3i Irish subsidiaries.

Following a career change in 1987 lasting one year when Clarke joined Motor Auctions Group as general manager and Finance Director, he joined Barclays Mercantile as divisional executive & director in 1981 where he served both in the UK and Ireland for some 10 years.

In 1991, he became a partner in Cullen Clarke, a specialist financial services auditing firm based in Dublin where he acted as advisor to many international groups on business transformation especially making use of leading-edge technology, process re-engineering and assisting in new asset finance start-ups, reconstructions, mergers and acquisitions.

Clarke subsequently consulted on behalf of the World Bank and the European Bank of Reconstruction and Development in emerging markets.

Together with his business partner, Dr Ed White, since 1992 he has been an active investor in many technological start-ups, automotive service companies and specialist financial service companies under the umbrella of the White Clarke Group, a company which he grew from start-up to a multinational technology solutions provider operating in over 30 countries worldwide with a staff of 500.

Married, with four children and three grandchildren, Dara spent his free time between Ireland, England and his property in Spain. He was a keen golfer and an avid supporter of the Irish Rugby team.

Following a funeral in Ireland, there will be a memorial service. This will take place close to Milton Keynes. Dates for both have still to be announced. All are welcome to attend.

In lieu of flowers, contributions may be made to these chosen charities in the UK: Broomfield Hospital (Burns Department): www.meht.nhs.uk/our-charity/ and Herts Air Ambulance: www.hertsairambulance.uk.com/.