Gear changes will soon be part of EVs, says Bosch 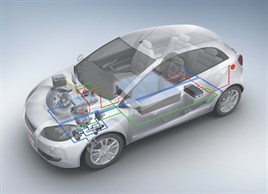 Transmission technology will soon find its place in electric vehicles (EVs), just as it has in petrol and diesel vehicles, according to Bosch.

Electric motors have no difficulty in running up to 20,000 revolutions per minute (rpm) – compared to petrol or diesel engines, which usually only run up to a maximum speed of around 9,000 rpm – and so can run in a single gear, without the need for a transmission.

To think of transmission and electrification as opposites is a misconception. Whether you're talking about an electric drive or a petrol or diesel engine, the right transmission will make any engine more efficient.

As electric vehicles become more popular, motorists are being introduced to automatic vehicles that do not use traditional transmission.

Most electric vehicles effectively operate in one gear without any need to change up or down – with reverse and neutral as the only options.

Bosch believes that changing gears will soon be part of the electric vehicle. High-precision automatic transmissions are essential in hybrid vehicles to ensure that the combustion engine and electric motor are synchronised with each another, but such transmissions could also find their way into pure electric vehicles.

In terms of the future, the biggest driver for modern transmissions is the desire to reduce CO2 emissions, according to Bosch.

They are primarily designed with one goal in mind and that is to keep the engine as close to its optimum operating level as possible.

There are already some very efficient nine-speed transmissions on the market, and it's only a matter of time before ten-speed designs come along.