A Government survey has illustrated the uphill battle that manufacturers face in trying to convince drivers to switch to electric vehicles.

It revealed that only 1% of motorists are considering adopting an electric car or van ‘quite soon’, while 4% said they are thinking about it but couldn’t give a potential timescale.

The vast majority (56%) of the 962 respondents hadn’t even thought about choosing an electric car or van as an alternative to a diesel- or petrol-engined vehicle.

The Department for Transport (DfT) survey also found that the most important factors deterring motorists from buying an EV were recharging (40%), battery range (39%) and cost (33%).

Less than 1% of drivers surveyed own an electric car or van, while 18% had thought about purchasing an EV, but later changed their mind.

However, not all motorists are put off the idea of an electric vehicle, according to the research.

More than one-third of respondents (37%) said that lower costs would encourage them to buy an EV as well as widely-available recharging points (17%) and the vehicle’s environmental credentials (16%).

The most important cost stated was the purchase price, followed by fuel and recharging costs, maintenance, insurance and vehicle excise duty.

Simon Best, chief executive of the Institute of Advanced Motorists, said: “It is clear that the Government has a long way to go to convince drivers that EVs really are the future.

“On the positive side, drivers are not worried about safety or comfort issues, but range anxiety and charging infrastructure remain real stumbling blocks.”

Alphabet said that residual value forecasting must be brought to the top of the agenda if companies are to start strongly considering adding EVs to their fleets. 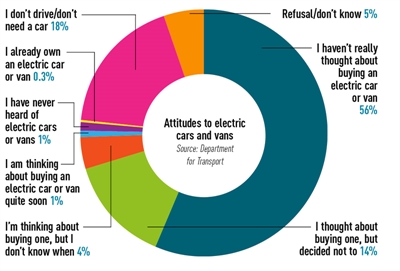 Jim McNally, head of asset risk at Alphabet, said: “Residual value calculations can be a barrier for prospective customers of alternative fuel vehicles.

“Although uptake of EVs is increasing, they are only a small percentage of the total car parc and the corporate market is not driving the uptake of EVs as strongly as perhaps it should.”

As a result, McNally says he understands the hesitation of fleet managers to acquire EVs.

The Government launched the plug-in car grant in 2010, which gives up to £5,000 towards the purchase price of an EV, and the plug-in van grant two years later, which offers a sum of up to £8,000.

Transport minister Robert Goodwill told Fleet News that take-up of the plug-in car grant has increased over the past year. 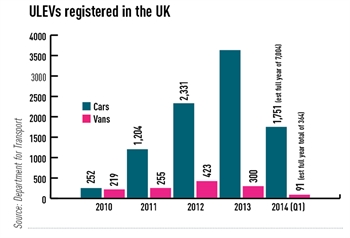 He said: “Fleet purchases continue to play an important role with just under half of all plug-in car and van grant claims being made by businesses.

“Business fleets are instrumental in normalising ultra-low emission vehicle technology and EVs play an important role for them – helping to reduce their overall emissions and providing a financially sensible option.”

Leasing companies are continuing to develop their EV offerings to businesses.

For example, Venson Automotive Solutions has recently  teamed up with Npower, Inmotion and Sheffield City Council to help up to 80 businesses across South Yorkshire add EVs to their fleets.