Technology is set to have a huge impact on the way the fleet industry chooses, operates and manages its vehicles over the next five years, according to a BVRLA survey.

All of the 61 rental, leasing and fleet management industry executives questioned believe that connectivity and smartphone integration will be ‘very important’ or ‘important’ in vehicle choice by 2019, compared to 78% now.

Within that proportion, the number of industry professionals that consider it ‘very important’ rises three-fold (from 20% now to 61% by 2019).

BVRLA chairman Gerry Keaney, who was speaking at the organisation’s recent Fleet Technology Congress, said: “Driverless cars are way ahead in time, but the pace of innovation is startling. Autonomous braking is now prevalent, but didn’t really exist on the market five years ago.

“It’s now not going to be too far in the future before you see our members buying only cars with that sort of technology in place.

“Innovation in the sector is now really generating value. Whether it’s safety functions, such as autonomous emergency braking, or fleet management features, such as telematics, the rental and leasing sector is well aware of the potential of developments in automotive technology.” 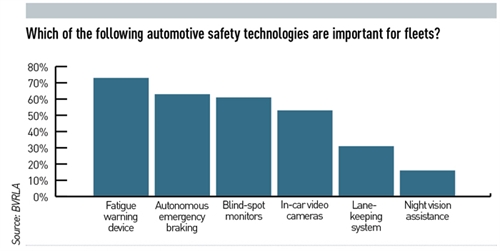 Although interest in technology is high, more than half (55%) of the BVRLA members surveyed believed that fleet operators would not be willing to pay for extra safety technology in their vehicles.

More than a quarter (27%) suggested that those who would pay would do so only if the cost was less than £500.

No-one said customers would be prepared to pay a premium of more than £1,500.

Keaney said: “There is a demand in the marketplace that we expect these features to come as standard, without an extra cost.”

The safety technology which will have the greatest impact according to respondents are fatigue warning devices, while features such as night-vision cameras are ranked among the least important for fleets.

Miles Elsden, deputy chief scientific advisor at the Department for Transport, who also spoke at the conference, agreed that autonomous technology is important.

“A lot of semi-autonomous driver aids have been creeping on to the market,” he said. “There are definitely safety benefits of cars talking to each other.

“Technology isn’t the barrier – we see legislation, regulation, insurance and acceptance as the challenges, and we’re doing what we can to help.

“That said, we’re not currently in a position to pick a technology. We’re very much in the VHS versus Betamax period.”

Keaney added: “We don’t see technology development as being a linear process. The automotive industry shouldn’t wait for a roadmap – we can see it being a scattergun approach.”

Standard fitment of telematics to rise

More than half of the vehicles on the market will be fitted with embedded telematics by 2021 compared to less than 25% now, according to Richard Robinson, director of Strategy Analytics.

This means more vehicles will be able to report ‘home’ to the dealer with faults, wear and tear, and servicing requirements, so specific parts can be pre-ordered in advance of the service booking.