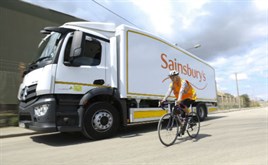 Transport for London (TfL) and London Councils have begun their consultation on the Safer Lorries Scheme which will see a ban on lorries that do not have safety equipment to protect cyclists and pedestrians from the capital’s streets.

The scheme will use a combination of powers held by TfL and London Boroughs to deliver a simple, quick and complete solution across all London roads. The proposed ban will require every vehicle in London over 3.5 tonnes, which are involved in a disproportionate number of fatal collisions with cyclists and pedestrians, to be fitted with sideguards to protect cyclists from being dragged under the wheels in the event of a collision. It will also require them to be fitted with mirrors giving the driver a better view of cyclists and pedestrians around their vehicles.

The ban would operate across London 24 hours a day, seven days a week, covering the same area as the London Low Emission Zone. It would be enforced by on-street enforcement and, in the future, could move to CCTV cameras subject to further approval by the Department for Transport and London boroughs.

The Mayor of London, Boris Johnson, said: “I have long been worried that a large number of cyclist deaths involve a relatively small number of problem lorries which are not fitted with safety equipment. My Safer Lorries Scheme would see those lorries effectively banned from our streets and the lives of thousands of cyclists and pedestrians would be much safer as a result. Vehicles that would be affected by this scheme can easily be retrofitted to comply and doing so will save lives. Companies such as Sainsbury’s and O’Donovan are already leading the way when it comes to cyclist safety and I urge others to follow suit.”

?Earlier this year, the Construction Logistics and Cyclists Safety (CLOCS) standard was developed by TfL with key construction industry partners. It sets best practice for construction vehicles in terms of safety equipment and driver training and far exceeds any regulatory requirement.  Already over 40 organisations have signed up as CLOCS Champions – from major construction projects like Crossrail and Thames Tideway Tunnel, to developers, construction clients and operators who are keen to be seen as industry leaders in this field.

?London’s transport commissioner, Sir Peter Hendy CBE, said: “The proposed Safer Lorries Scheme is a further demonstration of how London is working with the freight industry to drive up safety standards. Many vehicles in London will already comply with this scheme, but by forcing the dangerous minority to follow suit, we can ensure that everyone is doing what they can to help make our roads as safe as possible.”

?Councillor Julian Bell, chair of London Council’s transport and environment committee (TEC), said: “Heavy goods vehicles play an essential role in London’s economy, so the challenge we face is ensuring hauliers’ needs are balanced with the protection of other drivers, cyclists and pedestrians. London Councils is fully supportive of TfL in developing the Safer Lorries Scheme. We encourage stakeholders from across London to contribute to this consultation, to ensure these safety measures are as effective as they can be in protecting all road users.”

Sainsbury’s retail and operations director Roger Burnley said: ‘We’re proud to be here to support the Safer Lorry Scheme today. We’ve put an enormous amount of thought and research into creating a truck that we hope will be the safest on the road – for all road users.’