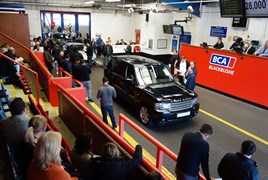 The headline average value of a used car fell from May's record level of £7,597 to £7,476 in June.   Average performance against CAP Clean improved marginally from 96.45% to 96.57%, while average age and mileage were virtually static compared with May.

Year-on-year, June 2014 was ahead by £476 or 6.8%, with average age increasing by a month and average mileage falling by around 1,000 miles over the 12 month period.  CAP Clean performance was up by more than a point, year-on-year.

Simon Henstock, BCA’s UK Operations Director said: “The summer months typically see some pressure exerted on average values and 2014 is following the pattern we have seen in previous years.  In many ways, the marketplace has not shifted significantly from last month as we remain short of good retail-quality stock, and supply and demand is reasonably well balanced, with conversion rates remaining relatively stable.”

He added “With increasing numbers of buyers choosing to purchase via BCA Live Online, cars presented in the best ready-to-retail condition will typically make values well in excess of guide price expectations. However, vendors should beware of expecting a similar return for vehicles in poor or below average condition.   There is little to be gained by placing over-aspirational reserve prices on poor condition cars if the market is not prepared to meet those expectations.  These vehicles need to be sold eventually and simply delaying the inevitable can cost more in the long term.”

Fleet & lease cars averaged £9,448 in June, a fall of £89 or 0.9% compared to May and the second month running that average values have fallen, although performance against CAP rose slightly over the month.   Values were up by £588 (6.6%) year on year, with CAP Clean performance slightly improved.  The retained value against original MRP (Manufacturers Retail Price) fell slightly compared to May to 42.32%, but was up year-on-year.